WINSTON COUNTY - The Alabama Department of Public Health has created a dashboard that provides real-time updates on the COVID-19 case count in the state, with countywide breakdowns.  To view it, click here.

The entire 5th grade class and faculty at Haleyville Elementary display a banner of support for Maddie Bishop.
HALEYVILLE - Haleyville City Schools, along with the entire community, is wrapping their loving arms and hearts around the struggles of 10-year-old Maddie Bishop--who found out in early April that she is battling stage 4 Ewing’s Sarcoma cancer that has spread into her lungs.
WINSTON COUNTY - The Winston County Commission has set Saturday, April 17, 2021, as the countywide cleanup day in coordination with the county transfer station in Haleyville, Pace Industries Landfill in Lynn and Hyche Landfill in Addison and Double Springs.
HALEYVILLE - Where does your water come from? In most places in the county, it comes from either Bear Creek or Brushy Creek. Double Springs residents receive water from both places, purchasing water from Haleyville (Bear Creek) and Arley (Brushy Creek). Double Springs has had a contract with Haleyville to purchase water for nearly 41 years, which is now in renegotiations.

Over time, some of the marks located flush with the ground can become buried. This one, EF1666 beside Highway 195 in front of the Double Springs Elementary School, had to be uncovered. It was monumented in 1989.
WINSTON COUNTY - Instead of making a long trip during this pandemic we’re in, why not take your family on a historically fun activity and never leave the area?
WINSTON COUNTY - Alabama senior citizen centers will be allowed to reopen for indoor activities as of Monday, April 19.
FULTON - Itawamba Community College’s CenterStage will present its spring show at 6:30 p.m., Tuesday, Apr. 20 in the W.O. Benjamin Fine Arts Center auditorium at the Fulton Campus. 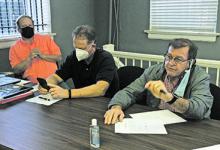 Winston County Commission Chairman Roger Hayes, far right, discusses a letter sent out by the sanitation office. Also shown, l-r, are county commissioners David Cummings and Bobby Everett.
DOUBLE SPRINGS - A letter presented by an Arley resident, fearing it was a scam, stirred up quite a stink at a recent Winston County Commission meeting.
A Haleyville woman has been arrested after allegedly forcing occupants out of a vehicle in a carjacking situation, then ditching the vehicle by driving it into a pond with the victims’ dog still inside. 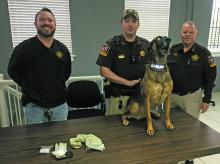 From left, Winston County Sheriff's Office Investigator Caleb Snoddy, K-9 Deputy Officer Jonathan Oliver with K-9 office Bojan and Winston County Sheriff Horace Moore with the confiscated drugs and items.
ADDISON - A traffic stop for a possible expired tag on a motorcycle turned into a much bigger incident when the Winston County Sheriff’s Office found 48 grams of methamphetamine in the rider’s possession.
MARION COUNTY - Donald Gene Nix, of Haleyville, has pleaded guilty in a case involving a dog being shot in 2019.
ASHRIDGE - Phillip Craig Miles, 38 years old, was found deceased in his home on County Road 55 near the Ashridge community between 5-6 p.m. on Wednesday March 31, 2021. 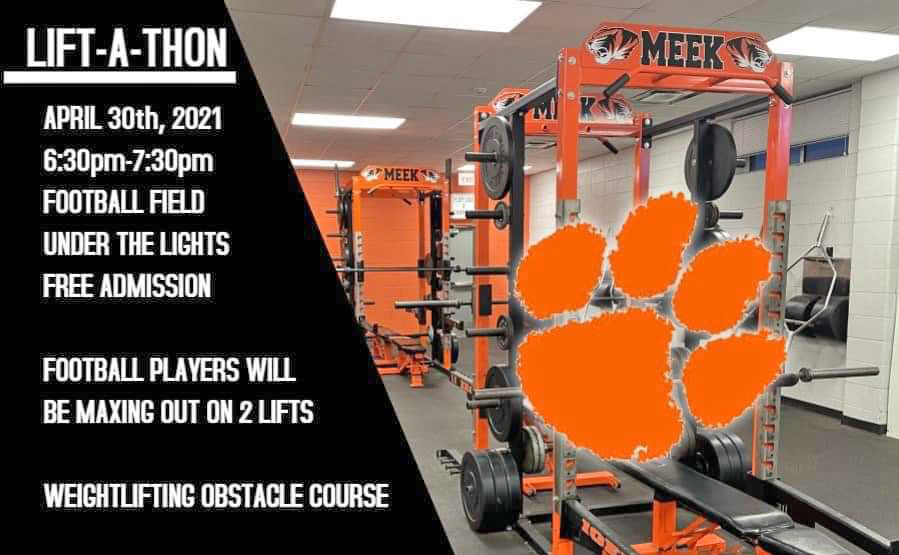 HALEYVILLE -Lakeland Community Hospital in Haleyville has received another shipment of COVID vaccine.

This is just one of multiple homes to receive extensive damage in severe weather Wednesday morning.

NESMITH - Several families in the Nesmith are picking up the pieces after severe weather blew through the area early Wednesday morning, March 31, pulling roofs off of houses, removed a garage from the side of a home and more damage.

BEAR CREEK - The anticipated opening of Timber Creek Housing this spring - with the expectation of 150 new jobs by summer - has resulted in a half million dollar industrial access project. DOUBLE SPRINGS - After taking a year off due to the COVID-19 pandemic, the Winston County High School Alumni Banquet is back.
Subscribe to