Russellville shuts out the Lions 35-0 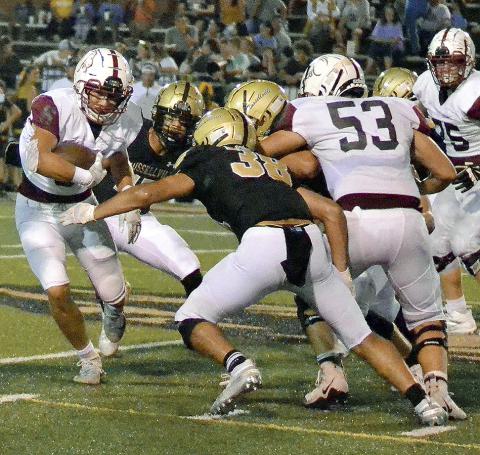 Christian Chambers battles his way around the corner on a carry for the Haleyville Lions.

RUSSELLVILLE - It was a tough night for the 4A Haleyville Lions  (2-3, 1-1) Friday, Sept. 27. The Lions were shut out 35-0 by the 5A undefeated Russellville Tigers, who hosted the game.
The first score for the Tigers came with 6:47 left in the first quarter. HHS was forced to punt on downs, giving RHS the ball at their own 37. It took six plays to score, with quarterback Jacob Bishop finding Joshua Price open for the touchdown. Miguel Flores-Zavaleta’s PAT was good.

Haleyville lost possession in the next series on an interception by James Hubbard for the Tigers at the HHS 41-yard-line.
The Golden Tigers worked their way down to the HHS 28, Brayden Hutcheson did a great job defending the pass in the end zone for the Lions, but the second attempt was a success with Rowe Gallagher bringing down the throw for six  points. The PAT was good to extend the hosts lead 14-0 with less than five minutes still left to play in the first quarter.

In the following drive for Haleyville, the Lions made it down to the RHS 2-yard-line. A substitution infraction and false start penalty pushed HHS back to 7-yard-line. A fumble put the Lions in a fourth-and-goal situation at the RHS 19. Jacob Lolley came in for a field goal attempt, but the snap was fumbled, allowing Russellville to take over on downs at the RHS 36.
This time, Haleyville’s Jarrett Baggett intercepted a Tiger pass, but Haleyville could not convert on the drive.
The Tigers got the ball on their own 45, where they worked their way to the HHS 1-yard-line, with a rushing touchdown by RHS’s workhorse Airreon McCulloch. The PAT gave Russellville at 21-0 lead at halftime.
RHS scored with about a minute-and-a-half left in the third quarter on a 10-yard completion to Gallagher. The PAT made the score 28-0.

The Lions lost possession again in the next series on an interception by Caden Watts for the Tigers at the HHS 32.
RHS scored again on a carry by Austin Ashley from less than a yard outside the end zone. The PAT finalized the scoring at 35-0.
HHS head coach Chris Musso commented following the game, “I thought our guys fought really hard tonight. We made some mistakes that we can’t afford to make. Anytime you are playing a good team and make mistakes, that gets you. That falls back on me as a coach. We will go back, get them worked up a get better.

“We get back in region play next Friday, so we haveto make sure we take care of business.”
The Lions will host region opponent Good Hope (5-0, 2-0) Friday, Oct. 4, with kick-off at 7 p.m. The Lions will be in homecoming.