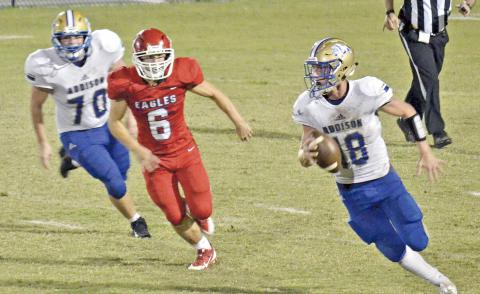 VINEMONT - The Addison Bulldogs (4-2, 1-1) came out of region play to travel to Vinemont (2-3, 1-1) Friday, Sept. 27.  The pairing of the Eagles and Dawgs usually makes for some good football, and this year's clash was no different.  The Dawgs went into halftime with a razor-thin lead only to come alive in the second half, heading back across the Cullman-Winston County line with a 21-6 victory.
Turnovers were an issue for both teams in the first quarter.  Vinemont fumbled on their very first play from scrimmage, giving Addison excellent position at the Vinemont 27.  Luke Chambers caught a pass two plays later to make it first-and-10 at the 18.  An illegal procedure flag on the Dawgs pushed them back five yards, and it was soon fourth-and-long.  Addison went for it, putting the ball in the air, but Vinemont's Dalton Whitehead intercepted it.  The Eagles could not capitalize on their turnover, either, and were soon punting it away.
The Dawgs finally got on the board near the end of the first quarter.  Caleb Crider got the first down on the first play of the drive, taking it into Eagle territory.  Crider kept working forward, then Weston Smith broke through for a six-yard run and a first down.  Quarterback Christian Roberts kept it on the the next play, and ran 33 yards for the touchdown.  Roberts called his own number for the two-point try, and the score was 8-0, Addison to end the first quarter.

The Eagles would get the only score of the second quarter. Starting at their own 35, Jack Hill got a pass off to Clark Whatley to move the chains nearer to midfield.  Dallin Dinkle broke away from several Addison defenders on a 20-yard run to the Addison 13 for the first down.  Dinkle kept pressing forward and was in the end zone three plays later.  Addison succeeded in shutting down the two-point conversion, but the Dawgs were only up by two going into halftime.

The second half began similarly to the first, only this time it was Addison fumbling, with Vinemont recovering at their own 32-yard line.  However, Vinemont couldn't make anything happen on offense, and Addison was soon back in the driver's seat.
Grant Rice returned the punt all the way to the Vinemont 36 to start Addison's next scoring drive.  Addison fumbled, but recovered it to keep the drive going.  Rice hit Chambers with a long pass on the next play, making it first-and-goal at the 7.  Sage Smothers ran it in on the next play for the touchdown.  Eli Howse’s PAT was good, and Addison's lead widened to 15-6 with just over seven minutes left in the third quarter.

Addison would score one more time in the fourth quarter.  Starting at their own 35, Crider ran right up the middle, breaking through several tackle attempts on a 27-yard run for the first down.  Smith gained two on the next play, then Crider ran 35 yards into the end zone.  The Dawgs went for two, but the pass was incomplete, and the final was 21-6.
Rice was 1-for-2 for 25 yards.  Roberts was 2-for-12 for six yards and had one interception.

Crider was the rushing leader for the Dawgs Friday night, gaining 106 yards in 10 total carries and one touchdown.  Chambers was the Dawgs top receiver on the night, catching two passes for a total of 31 yards.
Addison will be at home in a key region match-up Friday night, taking on the Colbert County Indians. The Indians beat Addison 35-8 last year in the debut pairing of the two teams.