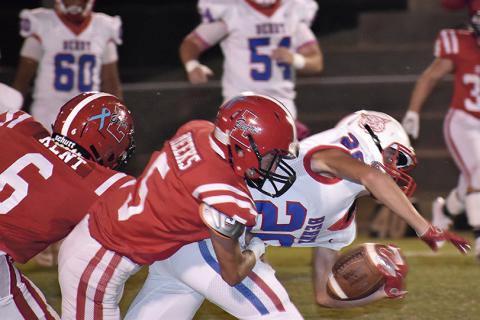 LYNN - When wildcats and bears attack each other, it’s going to be the bear everyone thinks will win. However, the Berry Wildcats put up a winning fight on the Lynn Bears’ home turf Friday night, Oct. 4, and came out a winner by 21 points in their 37-16 win.
Lynn received the kickoff and worked their way down field 54 yards to the 9-yard mark before fourth down. Going for the field goal, a tried and true kick lit the scoreboard for the first time on the night making it 3-0.
As Berry took the ball, Lynn’s defense kept them on the ground, forcing a punt. When Lynn received, they only had 67 yards to go for a touchdown and worked their way toward it.
As the second quarter started, Berry’s defense was able to keep Lynn away from the touchdown they sought. They got as close as the 2-yard line.
Berry’s Deason Nichols fumbled and Lynn recovered on Berry’s 8-yard line. This time, they were able to cross the goal line with Brandon Hill on the keeper. The PAT was good, leaving the score 10-0, Lynn leading.
The Wildcats decided enough was enough and after a complete pass, Johnathan Locke was edging toward the goal line. The Bears tried to defend their line, but were unable to hold, with Locke crossing for Berry’s first score capping a 56-yard drive. The PAT was no good, and the score stilled at 10-6.
Turnovers were the name of the game to finish off the first half. A fumble by Lynn gave the Wildcats a fresh set of downs, but on fourth down, Lynn’s Carson Legg intercepted the ball. It was fumbled later, but recovered by Lynn. After punting, Lynn intercepted Berry’s ball once again to end the first half.
Immediately on the kickoff for the third quarter, Berry’s Trenton Smith made a smash-and-grab 38-yard touchdown drive. While the PAT was no good, the score moved to 12-10, Berry.
On the next first down, Lynn fumbled, with Berry recovering at the Lynn 44-yard line. Locke moved it up to the 1-yard line before Berry crossed, leaving Lynn lonesome on the board 18-10 after Berry unsuccessfully tried for a PAT.
After Griffin Lynn grabbed a pass, Lynn was able to score one more time with Legg making it across, creeping up on Berry. Their two-point conversion try was no good, making it 18-16.
At the end of the third and beginning of the fourth, Berry was able to score on a 74-yard touchdown run, with Locke again doing the honors. Berry’s first two-point conversion was no good, jumping the score to 24-16.
Berry’s defense kept Lynn away and when Lynn was forced to punt, Locke got another touchdown, capping off a 41-yard drive. The two-point try failed, with the score at 30-16.
Berry would not let up when Gabe Jones was able to get a pick six. This time, the PAT was good, leaving the final score of 37-16.

Berry’s Coach Caleb Hynds said, “I’m very proud of the guys for the way they played tonight. Early on, we didn’t play our best football, but the guys kept playing hard. The second half was some of the best football we have played this year. The line played exceptionally well in that second half. We will have a big region game for homecoming Friday night, and we ask for all the support we can get. Let’s come together as a community and make Fred Webster Stadium as loud as we can get it Fright night.”
Berry had 374 yards on the night, with 291 of those rushing and 83 yards passing. They picked up 17 first downs versus 12 for Lynn. Lynn totaled 224 yards, with 173 yards rushing and 51 passing.
Berry will play against Brilliant for their homecoming game. Lynn travels to Hubbertville.