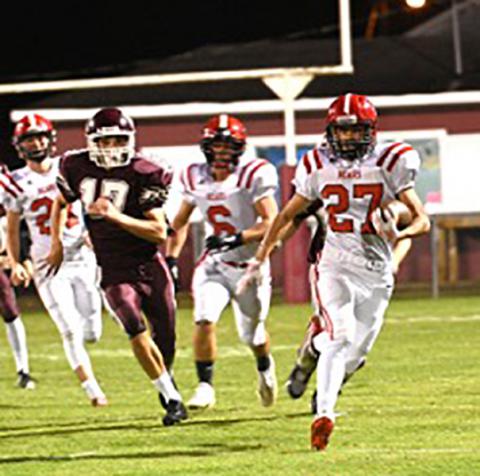 Jacob Rivera on the carry for Lynn.

By Allen Dunavant
Correspondent
HUBBERTVILLE - Celebrating homecoming on Friday night, Hubbertville hosted the Lynn Bears in Wiley Hollingsworth Stadium. Unfortunately, the visiting team spoiled the Lions’ homecoming by defeating Hubbertville 31-20.The Bears took the opening kick down the field, utilizing only two plays to move the ball into the Lions’ red zone. Facing first and goal at the 10-yard line, Micah Cagle took the handoff, advancing three yards. Second down brought Brodie Porter and Xander Morrow into the backfield, tackling Griffin Lynn for a three-yard loss and following an incomplete pass to Dalton Gilbert, the Bears were left facing fourth down and 10. Marcus Meeks kicked a field goal, putting the Bears on the scoreboard with 8:59 on the clock.
Forcing a Lion punt, Lynn  made their way downfield, utilizing M. Cagle on both runs and passes. Advancing across midfield to the Lions’ 27-yard line, the Bears faced fourth and five. Quarterback Brandon Hill connected on a pass over the middle with Jacob Rivera, awarding the Bears a first down at the 11-yard-line. Two plays later, Hill connected on a pass with Cagle in the end zone. The PAT kick by Hill was no-good, leaving the score 9-0 with 47.4 seconds remaining in the opening quarter.
Lynn turned the ball over on downs in the next series.
The next possession for the Lions was short. The ball came loose, with the Bears making the recovery at the 26-yard line. With the snap, Hill connected with G. Lynn, who was all alone in the left corner of the end zone for the score. The PAT kick by Hill was good, increasing the Bears lead to 15-7 with 4:31 remaining in the opening half.
Hubbertville’s ensuing possession also ended quickly, turning is over on downs.

First and second down brought Cagle out of the backfield for LHS, advancing the ball for a first down at the Lions’ 37-yard line. Reverting to the pass, Hill couldn’t connect on first and second down with G. Lynn nor Rivera, but connected with Gilbert on third down along the left sideline with A. Berryhill making the saving tackle at the five-yard line. First down brought Cagle up the middle, but Zach Tidwell, Porter and a host of others were on the stop, resulting in no gain on the play. On second down, Hill attempted to connect with G. Lynn, but the ball fell incomplete and on third down, Hill connected with Rivera, who made the reception out of bounds. Facing fourth down deep in the Lions’ territory, the Bears added three additional points with a field goal, closing the opening half with a 19-7 lead over the Lions.
The Lions facing fourth and goal with the ball near the goal line in the next series, scored with 4:55 remaining in the third quarter. The PAT kick by Arcidiacono was good raising the score 19-14 in favor of the Bears.
The Bears were facing third and four at the HHS 15-yard line. With the snap, the ball came loose and the Lions recovered deep in its own territory.
Hubbertville got  its first lead of the night with 6:24 remaining in the game. The two-point conversion was denied, but the Lions led 20-19.
The Bears answered the Lions score quickly. Following the ensuing kick, Lynn began its scoring drive at its own 26-yard line. Hill passed to Cagle on first down, with Cagle advancing the ball to midfield before A. Berryhill could make the tackle. Later, the Bears were facing third and nine at the Lions’ 38-yard line, but Hill connected on a passing route with G. Lynn along the left sideline for the first down to the 15-yard line. Two snaps later, Hill connected with Rivera on a pass for the touchdown. The two-point conversion was unsuccessful, but the Bears regained the lead 25-20 with 2:42 remaining in the contest.

Following the kick out of bounds, the Lions’ ensuing possession began at its own 42-yard line. Key took the ball across midfield on first down, awarding the Lions the first down at the Bears 48-yard line. Following a stop on Anthony, Key once again took the ball around right end, racing deep downfield with Hill making the saving tackle at the 12-yard line. Anthony took the handoff for three yards on first with Key being met after a two yard gain by Skylur Cheatham and others on second down. Facing third and five from the seven, Key on a keeper pushed the ball up the middle to the four-yard line. Following the official measurement, the Lions were facing first and goal with 30.1 seconds remaining in the game. The Bears defensive front held on first down, forcing the Lions to line up quickly for Key to spike the ball and stop the clock on second down. Third down brought misery for the Lions, as Key fumbled the snap with Meeks scooping the loose ball up and racing untouched for the 98-yard score as time expired on the game clock. The Bears spoiled the Lions homecoming with the final score of 31 - 20.
Lynn will host South Lamar Friday, Oct. 18.