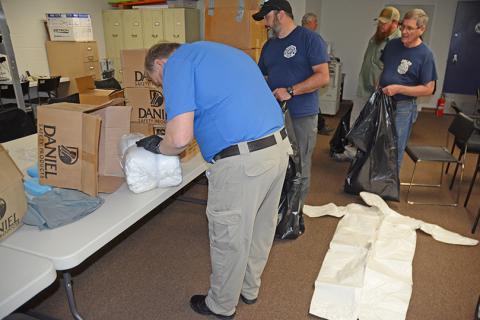 Winston EMA Director Jimmy Madison, left, distributes personal protective outfits to volunteer firefighters after a countywide meeting Thursday. Displayed on the floor is an example of the proper way to wear the clothing.

WINSTON COUNTY -  Firefighters  across Winston County, who put their lives on the line daily to help others, are speaking out, stating they have none of the supplies required by the Alabama Department of Public Health, to protect themselves from COVID-19.
“This is a different animal,” noted Winston County Emergency Management Director Jimmy Madison during an emergency meeting  attended by local and state officials, as well as emergency responders Thursday, March 19, at the Winston County Courthouse in Double Springs.
Madison stated Winston EMA was closely monitoring the situation with the state EMA and ADPH.
However, Arley Fire Chief James Rickett was the first among the firefighters to speak out  concerning a major need faced by departments across the county.
“We don’t have the tie-back suits,” Rickett began. “9-1-1 is helping us out a  lot on this. They are screening our calls.
“Fire departments are going to be the ones on the front lines. They are the ones that will be out with the sick folks, going into houses. Nothing is going to be clean when they get there,” Rickett spoke out.
“We do not have the equipment to do this.

We thought  this meeting was going to be about helping us. Right now, we do not have any help.
“Some of these departments have absolutely nothing,” Rickett continued.
In Arley, a call may come in at night where three or four firefighters respond.
“Three of those guys are over 70 years old,” Rickett remarked. “We’re kind of in that hazardous category in the first place.
State Representative Tracy Estes, who presided over the meeting, told firefighters to get with him after the meeting and a list would be formed of what supplies firefighters need.
Madison noted the EMA was putting together some packages, including the necessary suits required by the Centers for Disease Control, which firefighters could use when going on calls.
Madison had enough inventory from the state to give only four sets of suits for each department and the sheriff’s office.
After the meeting, fire departments from Winston County lined up at the EMA office at the Double Springs Municipal Building to receive their packets containing the required suits.
James Garrison, president of the Winston County Firefighters Association, noted he had been able to reach 10 of the county’s 11 fire departments about the need to obtain these necessary supplies.
“Every one of them is limited on their supplies,” Garrison pointed out.
Central Fire Department Chief Jeff Marksberry noted the CDC is very specific with what firefighters should be wearing.
“There  is not a fire department in Winston County that can meet the CDC guidelines,” Marksberry said.
Marksberry noted that his company has ordered respirators  but the demand is great, with most companies giving a three-month delivery timeline.
Judy Smith, with the Alabama Department of Public Health, who attended the meeting, noted that Winston County was moving in the right direction in their approach to fighting COVID-19, but stated the first mission was to give needed supplies to hospitals, nursing homes and assisted living facilities.
“On behalf of the state health department and your legislative group, they did solicit the strategic national stockpile to get equipment for hospitals,” Smith said.  “The first line of that equipment is going to hospitals, nursing homes and assisted living places, but there is help on the way.”
Smith said about 1,100 people per year die in Alabama and 60,000 in the nation, due to flu or flu-like illness.
“The difference is we have a flu vaccine. We do not have treatment for this (COVID-19) condition,” Smith said. “We don’t know what this is going to do.”
About 22 percent of Winston County’s population is over 65, meaning they are more susceptible to COVID-19, Smith pointed out.
“We have no choice but to take care of each other,” Smith said.
People with questions or needing updates can visit winstonalema.org, which provides updates and needful information, Madison said.
Lt. Erik Gilbreath, of the Double Springs Fire Department asked  Smith what  the protocol would be for firefighters who might be on the scene with someone who possibly has COVID-19.
“Call ahead if you are not sick enough to go to the hospital,” Smith responded. “If it’s a true emergency, people have to get to the hospital however they can get there.”
As of press time, Estes had planned to deliver gloves and face masks to local fire departments on Monday.