Senior citizens being fed, despite the coronavirus pandemic 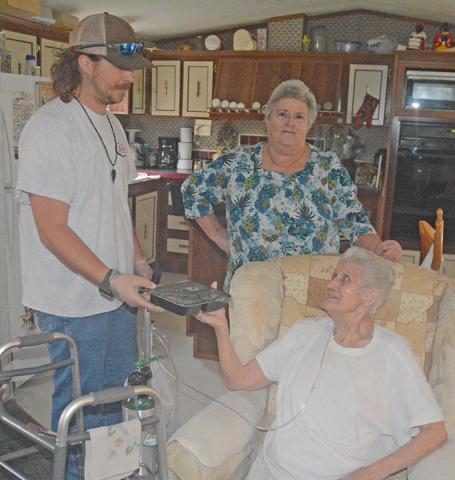 WINSTON COUNTY - Senior citizen centers across the state may be temporarily closed due to the Coronavirus-2019 pandemic, but municipalities across Winston County are making sure seniors are visited, fed and that their needs are met during such uncertain times. Despite the closures of senior centers, towns and cities across the county are moving forward, making sure seniors have a smiling face and a warm meal, when so many other aspects of their lives might seem so unpredictable.

During the closure of the Haleyville Senior Center, Director Beverly Donaldson, assisted by members of the city’s park and rec department, have been going out delivering meals not just to those confined to their homes, but all seniors from the center who choose to have meals delivered during the closure.
Riding the food delivery route with Donaldson this past week was park and rec employee John Cavender. Since the park and rec department is also closed, Cavender found  fulfillment in delivering the meals.
“It feels good to know we’re actually getting to do some good out of it, even when we can’t do what we’re usually doing,” Cavender said.
“We’re usually busy with all the different sports and everything.  Now we don’t have anything, so it’s a little strange,” Cavender added.
The Haleyville Senior Center, located in the basement area of the old 14th Avenue Elementary School, was ordered closed on March 16, along with several other city services, due to the COVID-19 pandemic. The closures are indefinite until the area is safe from the threat of COVID-19.
Due to the closures resulting from the COVID-19 pandemic, the definition of homebound has been expanded to allow home-delivered meals to people who usually would be able to attend the center, according to the Alabama Department of Senior Services.
In fact, neither federal law nor state regulations restrict home-delivered meals to only homebound individuals, according to Senior Services. The only eligibility criteria for home-delivered meals as defined in the Older Americans Act, is age--the recipient must be at least 60 years old.
“We had an emergency managers meeting the Friday before (the closure),” Donaldson said, “just to brainstorm what we could do if we were to close.”
Donaldson noted at the meeting that she would rather have meals delivered to seniors in Haleyville to keep in contact with her people and check to see if there was any need. Normally, the center has 20 meals delivered to homebound residents. The home deliveries during the closure have increased to 40, Donaldson said. The center delivers those meals Monday through Friday, with Donaldson  driving at least 25 miles a day.
Donaldson is assisted by Tangie Oliver, who is driving about that many miles, but in a different area.
The two have divided the routes, with Donaldson taking south of Highway 195 and Oliver taking north of 195.
Donaldson delivers meals as far south as County Highway 241 to Cherry Hill Road. Oliver takes the areas out to the Haleyville Airport and Needmore.
Seniors who may need a meal from the center on certain days are urged to contact Donaldson at 205-269-4228, so arrangements can be made.
The food delivery for seniors has remained on schedule, with the food being delivered in the mornings, with staff going in around 7 a.m. and preparing plates for delivery from 11 a.m. until 1 p.m., Donaldson said.
The senior center menu varies each day, but is based on a monthly menu provided by the state, Donaldson said. On the day the Alabamian traveled with Donaldson, she and Cavender were delivering meals of ham, potatoes, greens, cornbread, oatmeal cake and milk.
Meals on other days may include chicken or spaghetti, with all menus being set up by the Alabama Department of Public Health to be well-balanced.
Despite the center closure, Donaldson maintains a routine.
“I still go to work every morning. It’s just different when I get there,” she said. “I miss the people, but getting out and helping to deliver these meals is giving me contact with my people,” Donaldson added.
“I have told these boys who are helping me deliver these meals if they notice anything come back and let me know so I can check on them and see if they need something.
“It helps me a lot to be able to get out of the house,” Donaldson pointed out. “Some of my seniors don’t have any  family here. Those are the ones that really concern me.”
Dean Hulsey, a homebound resident who lives in the south Haleyville area, depends on the meals delivered to her from the senior center.
Hulsey used to attend the senior center, but has not been able to go the past several years due to helping to take care of her late sister. In fact, she has not left her home since June , 2019, recovering from surgery after shattering her hip during a fall in 2018.
“It means a lot to me for them to do that,” Hulsey said about receiving meals. “The only people I see are my nurse, the people that come in that give me a bath, my little nephew and the people who bring my food.
“It makes me feel good because I have someone to talk to,” Hulsey pointed out. “It makes me feel good to know they are trying to take care of me. I thank them every day for what they do, and I love each and every one for what they do.”

Double Springs
Double Springs Mayor Elmo Robinson noted the closure of their senior center, which is housed within the Double Springs Community Center has resulted in not only home-delivered meals, but also curbside service for seniors, who can come to the center and have meals brought out to them.
The closure has affected about 30-35 residents, Robinson said. About 18 of these residents are homebound, the mayor added.
The town has a van used to deliver meals to residents, while staff are on hand to provide meals to those who choose to drive to the center, Robinson said. Meals are being provided both ways from 11 a.m.- 1 p.m., Monday through Friday, he said.
“It hurts them that they are...staying at home.  A lot of them enjoyed coming up and communicating with other residents,” Robinson said.
“Hopefully people are calling and checking on them and making sure they are OK,” Robinson added.

Lynn
Lynn Town Clerk Marcia Manasco, who normally delivers meals to homebound seniors in the town, noted that approximately  five senior citizens had met for a meal at the fire department at one time. However, the recent opening of Mava’s Cafe increased the number of seniors to 15 attending senior center gatherings to  enjoy a meal and fellowship on Tuesdays and Thursdays. The town does not have a designated senior center where residents meet to play games.
Mava’s has temporarily closed during the COVID-19 pandemic, Manasco said.
Red and Lid’s Convenience Store features a deli that is still open No one is allowed to dine in, so Manasco calls in orders from seniors who want food delivery, then goes and carries it to them, Manasco explained.
“Most of (the seniors) live right here in Lynn, so we’ll deliver to their house,” Manasco said. “They are afraid to get out.  They want to stay in. They are afraid they will catch it (COVID-19).”

Arley
Senior citizens in Arley have been meeting at the community room at the Arley Fire Department. The center there has been shut down to the public since before the mandatory closure, after following updates on the COVID-19 pandemic.
Cathy Cooper, director of the senior program in Arley, noted the program is just getting off the ground, meeting the first and third Mondays and Thursdays, but is not yet serving meals to seniors.
“We are not government-sponsored yet. We don’t have food yet,” said Cooper.
“We started this (program) in October. It’s very informal at this point. We’re trying to find a place we can meet so we can get not-for-profit status and work our way up from there,” she added.

Addison
Addison Mayor Marsha Pigg said the town’s senior center,  located at the former town hall building on County Road 41, has been temporary closed.
“I had my water men check on the elderly, if they need anything,” Pigg said.
“We only met once a month at the senior building and had bingo and a lunch, so they don’t depend on meals from us,” Pigg said. “We’ve been checking on the elderly.  If they need anything, we are going to get it for them.”