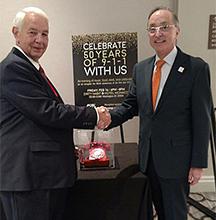 Haleyville Mayor Ken Sunseri, left, and National Emergency Numbers Association CEO Brian Fontes with the red telephone used for the first 9-1-1 call in the nation in Haleyville 50 years ago.

HALEYVILLE - All eyes were on Haleyville, Alabama, last week as all conversations from national officials were centered on the birthplace of the nation’s first emergency 9-1-1 call made there, during a grand celebration in Washington, D.C. commemorating the 50th anniversary of that historic call.

Haleyville Mayor Ken Sunseri, his wife Kay--who, by the way, is the daughter of James Whitt, Haleyville’s mayor when the call was made in 1968--as well as Mike Evans, president of the Haleyville Area Chamber of Commerce, were among those attending the gala.

The red carpet was literally rolled out for these visitors who everyone was anxious to meet, from a city everyone couldn’t wait to hear more about, on the actual 50th anniversary date of the first 9-1-1 call on Friday, Feb. 16.