Kennedy to be inducted to state Sports Hall of Fame 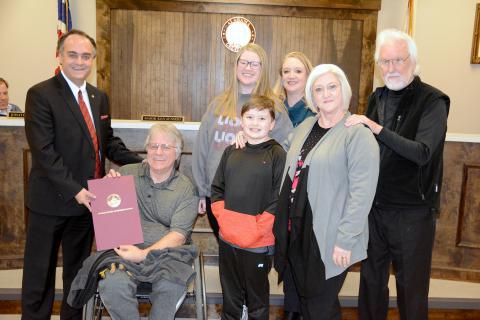 By Chad Fell
Senior Reporter
nwanews@centurytel.net
HALEYVILLE  State Representative Tracy Estes had a special resolution to present at the Tuesday, Jan. 21, meeting of the Haleyville City Council, honoring Doug Kennedy for his upcoming induction into the Alabama Sports Hall of Fame.
Kennedy, who has become known as a distinguished paralympian, holds many world records and awards, including the Sington Award as the Physically Challenged Athlete of the Year for the State of Alabama.
“I Mr. Kennedy what an honor it was for me to do a small thing for him and how much I appreciate how well he represents our community,” Representative Estes pointed out.
“Not every community can claim they are the hometown of a Sports Hall of Fame member in our state,” Estes added. “I am grateful that we can claim that. It’s just another thing to put Haleyville on the map.”
Estes had never met Kennedy face-to-face until the council meeting when the honor was presented.
“He is a very humble man. He is driven obviously, or he would not be able to accomplish the things that he has,” Estes added.
“I don’t know if any of us can fully appreciate the amount of time, energy and commitment he has put into this process,” he said.
Kennedy was surrounded by friends and family while receiving the resolution from Estes in the City Hall courtroom.
Joining Kennedy were his wife, Gracie; daughter, Tracy Martin and grandchildren Mason Martin and Maddie Grace Martin, along with lifelong friend and supporter Jim Masdon.
“It’s an honor for me to be recognized for what I did, and for what I hope I can continue to do, just in a different manner,” Kennedy said.
“For Tracy (Estes) to go to the extent he has  to get this done means so much to me,” he added. “I just hope I can continue to do the right thing in representing the town and the state as best I can.
“I feel I have a lot to give to the sport, and I feel I owe the sport so much, I don’t think I could ever repay it for what it did for me  in that time of my life.
“I was at a very low point, and to be introduced to athletics and into the racing world, and to accomplish what I did, I didn’t really realize at the time I was doing it. I was racing you know,” Kennedy  continued.
Some of Kennedy’s wheelchair racing competitors had nicknamed him Racehead,

because he was so wide open in the sport, he said.
“That’s the only way I have ever done anything in my life is wide open or shut it off,” Kennedy noted.
“It is what it is, and I did what I did, and I thank God for it,” he continued. “It took me a lot of time, that I wished some-times I had spent more time with my family, but I couldn’t. I had to devote all my time to do what I did.”
Kennedy's career began in 1987, when he won the silver medal in the Stoke-Mandeville games in Albany, England, in the pentathlon.
He then won two gold medals in the Goodwill Games in the 1500m in 1991. At the age of 33, he dominated as the top wheelchair racer in the United States, holding the world record for the 1500m, the 10K, the 15K and the five-mile races.
In 1992, he was a member of the United States Paralympic Team, of which he had also been a member since 1988.
In 1992, Kennedy was bound for Australia where he participated in the Oz Day 10K Race in which some of the world’s top wheelchair racers participated.
That marked the second annual trip for Kennedy’s participation in the race in Australia.
At the time, Kennedy expressed in the Alabamian how thrilled he was to be racing beside the world’s top wheelchair athletes.
Kennedy had been an avid wheelchair racer since 1986, having participated in races not only in Alabama but Florida, Georgia, Tennessee, Washington D.C., Connecticut, Maryland, Illinois, Washington state, Wisconsin, Minnesota, Indiana, Mississippi, Louisiana, Texas, Arizona, Oregon and California.
Some of the other international races in which Kennedy has participated included Korea, Canada and England.
“I hope I have made the people of Haleyville proud,” Kennedy said. “And I really appreciate all of their support, no matter what kind of support that may be...I appreciate everyone in Winston County and in the state of Alabama.”
“As he continues to inspire countless others, Mr. Kennedy is a epitome of commitment, diligence, heart and talent,” the resolution reads.
“It’s a great honor. We never really expected it,” noted Kennedy’s wife Gracie.
“I never once in my life thought anything like this would ever happen,” Kennedy added.
Kennedy’s life was forever changed in 1984, when he fell from a lumber truck, resulting in paralysis.
Soon after, he decided he would not sit around and feel sorry for himself but rather use his new wheelchair skills for racing.
Masdon, who was present during the presentation of the proclamation honoring Kennedy, had purchased Kennedy’s first wheelchair racer.
Masdon was also known to help Kennedy financially, as each race cost around $5,000, he recalled.
“I don’t want pity because of my handicap,” Kennedy was once quoted as saying. “All of us (handicapped)  don’t think of our disability because we have learned to focus on life.
“We are happy. I concentrate on my ability, not my disability,” Kennedy once said.