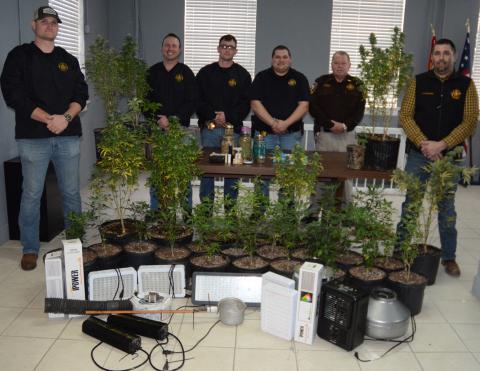 ARLEY  - A $10,000 marijuana growing and selling operation in the Arley area was busted by the Winston County Sheriff’s Office, which seizing 103 plants ranging in size from seedlings to four feet, as well as arrested a local man on numerous charges.

“This is the largest marijuana grow I have been a part of disrupting,” Snoddy pointed out.

Around 4 p.m. February 18, Snoddy, accompanied by fellow investigator Jacob Eward, went to Pirkle’s residence on County Road 63 as part of an ongoing investigation, finding him at home.

“We had suspected there might be a possible marijuana lab,” Snoddy said.

As Snoddy and Eward spoke with Pirkle, he informed them he had some marijuana in his pocket and proceeded to produce four grams of marijuana in a small glass jar, Snoddy noted.

Investigators decided after speaking with Pirkle to obtain a search warrant, which was executed with the assistance of Chief Deputy Brett Rodgers and Deputies Josh Bennett and Nic Burns.

A search of the manufactured home found a larger marijuana growing operation, where 10 maturing plants - ranging in height from three to four  feet - were found in pots, as well as other items used to cultivate marijuana, investigators said.

These items included high powered sodium and UV lighting. Other drug related items found inside the residence were scales, bags, pipes, grinders and bongs with residue in them, as well as pipes used for smoking methamphetamine which also had residue, Snoddy said.

Plant foods and gardening tools were also present, as well as a half pound of cut marijuana, investigators said.

Found inside a gray 2002 GMC Yukon, which Pirkle was in upon his initial contact with law enforcement, were marijuana for personal use, as well as 1.6 grams of meth and some pipes believed to be used for smoking meth, investigators said.

Bennett discovered a shed on the property, inside of which was found a separate marijuana growing operation with 95 plants ranging in height from three feet to seedlings-- a similar operation to that found inside the manufactured home, complete with UV and sodium lights, a humidifier and fan, authorities said.

Investigators determined that Pirkle had been in the marijuana growing and selling operation from that residence over the past six to seven months.

The marijuana plants, all drugs and lab materials were confiscated by the sheriff’s office and Pirkle was taken into custody without incident and transported to the Winston County Jail in Double Springs.

Sheriff Horace Moore commended all of his employees for a job well done, while also sending out a warning to the public.

“I want to let the people of Winston County know if you’re going to use or sell dope and steal, then we are coming to get you,” Moore pointed out.

Eward wished to thank the public and the community for their assistance in helping the sheriff’s office nab Pirkle and put a stop to his growing and distributing operation.

Those who suspect anyone of selling drugs or those who know of suspicious and possibly illegal activity occurring is asked to please contact the sheriff’s office at 205-489-2115.

“It will be investigated,” Snoddy said. “We’re going to nip it in the bud.”

Rodgers added, “Our investigators and deputies did a great job. Not only teamwork, but hard work pays off.

“This will eventually keep (drugs) out of the hands of our kids going into the school system,” Rodgers pointed out.

Snoddy agreed that marijuana plays a small role in the larger drug culture in which meth and heroin are consumed in conjunction with marijuana--because of growing operations like the one they busted.

*When a defendant is charged with a crime, the charge is merely an accusation until or unless proven guilty in a court of law.