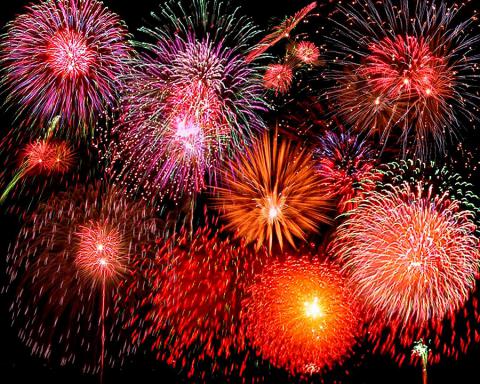 ADDISON   -  This year’s Independence Day celebration in the Town of Addison promises not only the biggest and best fireworks show in the event’s history, but also a few surprises.
The festivities, which have rebounded after the festival’s cancellation last year due to the COVID-19 pandemic, will hopefully attract the largest crowd ever to attend the event, pointed out Mayor Marsha Pigg. Thousands attend the festival and fireworks show on an average year, town officials said.
“This will be our biggest fireworks ever,” Pigg emphasized. “We always have a big, big crowd for the fireworks.  I think we’ll have even more this year.”
Last year, even through the festival was cancelled, the fireworks show was held, with the public watching the show from different vantage points throughout the town, either from their vehicles or in family groups, officials said.
“Fireworks start at 9 (p.m.), so you don’t want to miss the beginning of it,” Pigg reminded.
This also marks the first year  the town has extensively decorated Alexander Park, located off of County Road 41 north, for the festival.  Decorations include inflatable Uncle Sams throughout, as well as red, white and blue colored lights, the mayor explained.
“I wanted to do it a little extra special this year,” Pigg noted.
This year’s event comes at a positive time, when many things closed over the past year due to the pandemic are reopening and business in the town is returning to normal.
“The churches are opening back up. The city hall lobby is back open. All the banks are back open,” Pigg said.
Thousands are expected to be drawn to Addison’s Independence Day festivities, which this year will be on Saturday, July 3, festival organizers said.  The festival will be much more than the featured fireworks show for which the event has become widely known, stated organizer Darrell Smith, a member of the Addison Fire Department.
The day will begin with a parade. Line-up for the parade will be at  9 a.m. at First Baptist Church off of Highway 278.  The parade, which will start 10 a.m., is open to all forms of emergency first responders, churches, businesses, organizations and any entry that would like to take part, Smith stated.  Fire departments from throughout the county and area are urged to participate in the parade.
“Usually, the Fourth of July is the biggest parade as far as floats,” Smith said about Addison’s annual parades.
The parade will travel down Highway 278 to the downtown area, turn onto McHann Road then loop back onto the highway ending back at First Baptist, according to Smith.
Alexander Park, which will open to the public around 3 p.m., will contain many arts and crafts and food vendors, along with face painting, organizers said.
“Come hungry because we have a lot of food trucks coming,” said Smith.
“We’re not accepting any more food vendors,” Smith pointed out.
However, arts and crafts and other vendors are still being accepted. To reserve a space, arts and vendors need to call (256) 338-2583. All spaces are available free of charge.
A percentage of gross sales from food vendors go to the Town of Addison, according to Smith.
“We’re doing something different this year,” said Smith about the live entertainment.
This year, the Native American group White Horse Singers will kick off the live entertainment portion of the festival at 5 p.m. The White Horse Singers will do ceremonial dances and songs complete with drummers. A children’s dance will also be held.
A special moment of the performance will be when members of American Legion Post 106 in Addison will join the Native Americans in honoring past, present and future military veterans with a special presentation.
“Anybody who has been in the military will be invited into the ring at that time,” Smith stated.
After the performances and tributes end, the headline act Sipsey Falls will perform starting at 7 p.m. from the stage area in the park, Smith explained.
Sipsey Falls will perform until 9 p.m., when they will take a break.
At this point, the festival will pause for the fireworks show, with the fireworks being set off from the Addison High School baseball field. Those enjoying the festival at Alexander Park are welcome to watch the show from the park’s softball fields.
The public will have a great view of the fireworks show from the park area, according to Smith.
Those out in town who want to have a good view of the fireworks show can seek different vantage points, but not too close to the high school field area where the fireworks will be shot.
“People think, the closer you get, the better you are,” Smith said. “If you are doing a big show, you need to actually be farther away to enjoy them.
“We’re hoping most everyone will come to the park for the music. That’s why we separated it, so people at the park will move out there to the softball field,” Smith continued.
As soon as the fireworks show ends, the public is urged to stay around because Sipsey Falls will take the stage once again with a live performance from around 9:40 p.m. until 11 p.m., he said.
“After the fireworks, we usually end the festivities,” Smith said. “This year, we are going to start back up after the fireworks with the band playing again.  If the crowd stays, they’ll keep playing.”
Smith thanked all the sponsors who make the town’s Independence Day celebration possible.
“Without our sponsors, we couldn’t do this. There’s no way,” Smith pointed out. “Our sponsors in the past have been great, and this year they have been super great.”
The fire department also thanked Pigg and the Addison Town Council for providing the fireworks for the show each year. The cost of the fireworks is nearly $25,000.