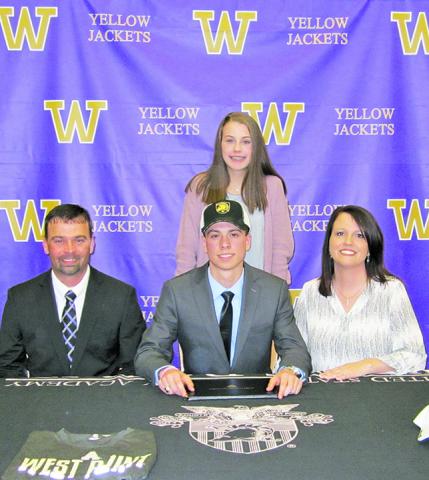 DOUBLE SPRINGS - Zachary Wright, a 17-year-old senior at Winston County High School, recently received a $285,000 scholarship to the United States Military Academy at West Point, one of the most prestigious military academies not only in the United States, but in the world.
Wright signed with West Point Monday, March 18, at the library of the high school. Included in his  scholarship is room and board and tuition. Wright will also receive half of a second lieutenant’s pay while at West Point.
“West Point looks at three things,” Chris Fry, field force representative of West Point and a retired lieutenant colonel, said. “They look at your academics, your leadership qualities and athletics. Every cadet will play sports while they are there, whether it’s a division level sport or intramural. Everybody’s on the same scholarship, on the same program. You go to West Point, you’re getting a full ride.”
In return, Wright will complete a five year commitment with the United States Army, with two additional years in reserves.