Lynn comes out on top 19-12 over Brilliant 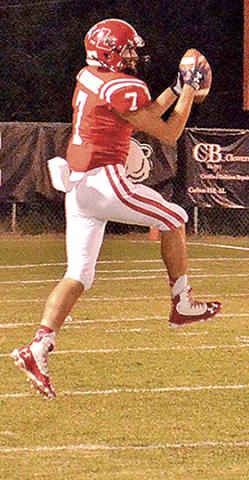 Alex Narramore with the catch.

LYNN - The Brilliant Tigers came to Lynn Friday night and turned the Bears' homecoming into a nailbiter, keeping all the fans on the edge of their seats right up until the end of the game, when Lynn pulled it off 19-12.
Lynn opted to receive the opening kick-off, setting up shop on their own 40.  After a gain of 5 by J.T. Linley, Griffin Lynn converted on third down with a 13-yard run, moving the chains to the Brilliant 43-yard line.  Carson Legg kept the drive going, getting a first down at the 32-yard line three plays later.
As the Bears were approaching the red zone, Brilliant's Wiley Hanson led the Tigers' defense to stop the home team, making it fourth down.  The Bears went for it, and Griffin Lynn got the first down at the Brilliant 13. The Bears went for it again on fourth down, but a low snap was fumbled and scooped up by Brilliant's Kade Bryant, giving the Tigers possession at their own 24.  The Tigers were unable to make anything of the turnover, however, and the first quarter ended scoreless.
Lynn finally got on the board later in the first half on a seven-play drive that began near midfield.  Quarterback Brandon Hill tucked it and ran 31 yards on the first play of the drive to the Brilliant 22.  Micah Cagle gained five yards over two plays, setting up a fourth-and-short situation.  Griffin Lynn scored from 12 yards out to put the Bears on the board.  The PAT was wide right, but Lynn was up 6-0 with 4:17 left in the half.
Another Lynn fumble set up Brilliant's first score of the game right before halftime, with Brennan Stanford falling on the loose ball this time, giving the Tigers excellent field position at the Lynn 25-yard line.  Bryant's pass to Stanford was good for 6 yards, then Bryant hit Braden O’Mary in the end zone for the TD.  A delay of game penalty against Brilliant pushed them back 5 before they tried for the PAT, which was no good, and the teams headed to the locker rooms tied at 6 to end the first half.
Brilliant began the second half on offense, but got picked off by Griffin Lynn, who ran it back to the 3-yard line.  Several flags were thrown on the play, and the referees deliberated in the middle of the field for what seemed like several minutes over the call.  Each team was called for a personal foul, with those penalties being offset.  However, a block-in-the-back call on Lynn pushed the Bears back to the Brilliant 35-yard line.  Griffin Lynn got the first down three plays later at the 34, then got his second touchdown on the night three plays later.  Both teams were hit again with penalties on the touchdown play, but they offset and the touchdown stood.  The PAT was good this time, and Lynn was ahead 13-6 with just under five minutes left in the third quarter.
Lynn's Chance Majors recovered a Brilliant fumble, but the Bears couldn't make anything out of the turnover, and the third quarter ended with Brilliant back in the driver's seat at their own 23-yard line.  The drive was fruitless, and the Bears got it back.
Hill took the punt all the way to the house, but another block-in-the-back call on the home team negated the touchdown, moving the Bears back to near midfield.  On the next play, Bryant intercepted a pass and ran it all the way back for the touchdown.  The two-point try failed, but Brilliant had made it a one-point game, with the Bears only up 13-12 with 10:38 left in regulation.
The Bears would widen their lead on the next drive, which began with Hill bringing the ball all the way up to the Lynn 42.  Griffin Lynn gained five on the next play, then got the first down at the Brilliant 44.  After Cagle was dropped for a loss, Hill got a pass off to Jacob Rivera, making it first-and-goal at the 3.  Griffin Lynn got the touchdown on the next play.  Lynn's first point-after attempt was penalized, so they had to try again.  This time they went for two, but still had no luck, and the score was 19-12 with 8:32 left in the game.
Both teams continued having penalty trouble, with Brilliant once again taking over on offense after two fruitless drives.  The Tigers took to the air as the time began to run out, with Bryant hitting Preston Conniff, then keeping it himself for a first down at their own 33.  Bryant got another first down two plays later at the Brilliant 44.  Stanford would come up with the pass three plays later, pushing into Lynn territory at the 44.  The Tigers kept it flying, and got closer to the end zone at the 33-yard line on three more short passes.  A chop block against Brilliant pushed them back 15, but Bryant was able to hit Conniff once more for a first down.  The clock was not Brilliant's friend however, and the minutes ticked away before the Tigers could get into the end zone, making the final 19-12, Lynn.
The Lynn Bears will take a break from region play this Friday night, traveling to Waterloo to hopefully get revenge after a close loss of 10-8 last year.  Brilliant will be at home Friday night, hoping to pick up their second win on the season in their match against Tharptown.