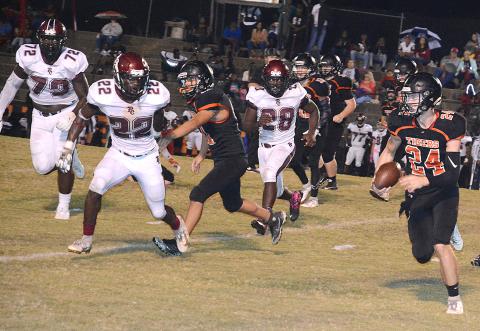 Stuart Waldrep comes around the corner on a carry for Meek.

ARLEY   - It rained during the first half of play,  but the Meek Tigers were under a storm warning, as the Pickens County Tornadoes blew into town leaving scattered Tigers in their wake 44-13 Friday night, Oct. 11.
The Meek Tigers faced a whirlwind of a defense Friday night, at the mercy of the  Tornadoes, that dominated the ball game with a wall of size and quickness in the regional matchup.
The Tigers were the undercats going into the game. Due to the Tornadoes devastating the Tigers’ hopes for a season win and leaving them scoreless 44-0 at the half, the final two quarters were abbreviated to eight minutes each.
This allowed the Tigers to come out on the prowl and score 13 points of their own, but not near enough to take the victory.
The loss puts the Tigers 0-8 on the season and 0-6 on the region.
The Tornadoes started off possession on the night, with Kajaveion Byrd putting the ball in play from midfield.
A wall of Tiger defenders met the play at the line, but the Tornadoes got the ball to Byrd,  who went out of bounds well into Tiger territory at the 20 yard line.
Quarterback Javion Belle connected with Byrd who darted 15 yards to score with 10:23 left in the first quarter.  Jah-Marien Latham toed the PAT for 7-0.
The story was the same throughout the first half, as the Tigers struggled with yardage, being forced down at the line and having to punt, despite sturdy efforts from quarterback Stuart Waldrep and running plays by Matthew Clark.
In fact, the Tigers were forced to punt with two negative yards, after an offsides call on their first drive of the night.
The Tornadoes received the ball at their own 40 with Zackary Boone pulling one out of the air and darting left to midfield.
Belle had a keeper up the middle far into Tiger territory near the 35. Ja Corian Cosby got the ball within range at the 5, then carried it on across with 6:16 left in the first quarter.  Latham’s PAT made it 14-0.
The Tigers returned the kickoff to their own 26. Tommy Daniel tried to find ground, and James Brown met a sturdy wall of Tornado defenders on his carry attempt.
Brown tried the run, but was no match for the large defenders smacking into him, including Latham and Zebdricous Jones. The Tigers were once again forced to punt.
Throughout a majority of the 1st quarter, the ball stayed on the left side of the field in this same scenario, with the Tigers struggling with yardage and the Tornadoes taking over well into foe territory.
After the Tigers were hit with back-to-back offsides calls, Meek Head Coach David Norwood yelled  from the sidelines, “Guys, we’re killing ourselves.”
Waldrep punted deep from the goal line, giving the Tornadoes good field position at the Tiger 20. The next play was a pass sailed deep and complete to TaDarien McIntosh for the score with 3:30 left in the first quarter. This time, the PAT failed, and the score was 20-0.
The Tigers held onto the ball longer on their next drive with a key play being a first down off Clark’s carry. Yet, the Tigers ended up short and were again forced to punt as the second quarter began.
Jerry Wallace of the Tornadoes  slid down on turf wet from the earlier rain, with possession at the their own 30. Then  Cosby took off with quickness  meeting the uprights with 11:33 left in the second quarter. The Tigers pounced on a reverse play to AlJaron Edwards, so the two point conversion failed. The score was 26-0.
The Tigers were kept within 10 yards on their next drive, being forced to punt, with the Tornadoes putting the ball in play from their own 40 yard line.
Five plays later, Elijah Barnes toted the ball across the line with 6:37 left in the second quarter.  The Tigers rose up, blocking Latham’s PAT attempt. The score was now 32-0.
The next Tiger punt gave the Tornadoes good field position near midfield.
A double pass from Belle to Edwards deep toward Jerry Wallace fell incomplete, but the next play sent Cosby quick at left, rushing to score with 3:47 left in the second quarter. A pass intended to Wallace fell incomplete, so the two point conversion failed. The score was 38-0.
The next Tiger punt gave the Tornadoes possession at midfield with Edwards darting deep  to the Tiger one-yard-line.
Barnes then crossed the line buried under a host of Tiger defenders, with 49 seconds left until half time.  The PAT failed, and the score at half time was 44-0.
The Tigers came out the second half pouncing on the plays and taking quick action to score.
The Tigers started out the second half with possession at their own 40 yard line.  Clark went at left stopping 10 yards short of midfield.
A pass sailed deep and complete to Tommy Daniel for a big first down play and good field possession deep into Tornado territory.
Clark carried a little deeper to the 10, when Waldrep darted at right to score with 5:21 left in the third quarter. A Tigers offsides call backed up the extra point try, and Waldrep’s  PAT failed. The score was 44-6.
In what appeared to be a reverse of first half action, the Tornadoes were actually forced to punt. A fumble on the snap was recovered deep in Tornado territory by Latham, who was flipped over by Waldrep.
The Tigers had the ball in play from the foe 26, with Clark having fancy footwork for the Tigers moving the ball downgrid and setting up the Tigers for the kill, as the 4th quarter began.
The Tigers had the ball at the Tornado 20, when Clark darted to the uprights with 7:08 left in the game.  David Tidwell’s PAT was good, and the final score was 44-13, Tornadoes.