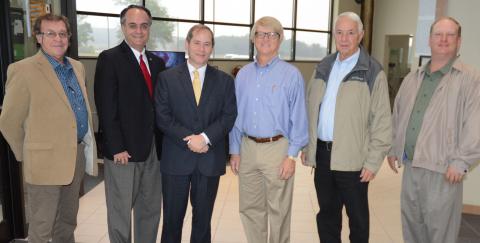 HAMILTON - Tombigbee Electric Coop has announced a $774,000 Appalachian Regional Commission grant will be applied  to furthering the ongoing regional project connecting both homes and commerce in rural Alabama to high speed internet service.

Steve Foshee, president of Tombigbee, on Friday, Oct. 25, met with local officials as well as a representative of U.S. Congressman Robert Adertholt, who has been instrumental in helping Tombigbee secure  a series of funding, establishing high speed internet service.

The grant will be applied toward equipment costs, but will help the continued expansion  of high speed internet throughout the region, being headquartered in Lamar County but also effecting the entire region including Winston County.

Congressman Aderholt noted that rural America is being looked at differently than ever before. “For far too long, Washington has looked at rural America as an expanse in between the cities and their suburbs, as opposed to the backbone of America,” Aderholt pointed out. “Yet, these are the people that raise our cattle, work in the factories that dot rural landscapes and til the land in order to provide food for our plate.

“The money we are investing in rural broadband is not only Washington putting our money where our mouths are, but also a line in the sand that the days of looking past rural America are over,” Aderholt continued.

“Access to high speed internet is now just as important to a high quality of life as electricity, water and sewer,” Aderholt added. “As a country, we cannot allow large sections of our population to be cut off from the rest of the world, and therefore, be cut off from economic opportunties. I believe this is just the beginning of bringing rural America into the 21st Century where it belongs,” Aderholt concluded.

Representative Estes added, “Receiving this grant will allow Freedom Fiber to continue moving forward on its historic project I want to commend Steve (Foshee) and the Tombigbee board of directors for their vision in bringing this much needed service to rural Alabama.

“More often than not, folks living in smaller communities stand on the sidelines and watch as metropolitan areas experience growth and advancement first,” Estes added. “This is a rare opportunity for us to be leading the way and I want to thank Tombigbee for their tireless efforts.”

Estes also commended efforts of Congressman Aderholt in these projects. “He has been at the forefront of our efforts to secure federal grants to keep this project moving forward in a steady motion,” he said. “He will continue to play a vital role as the face of Freedom Fiber and the people of this part of our state in the coming weeks and months ahead,” Estes continued.