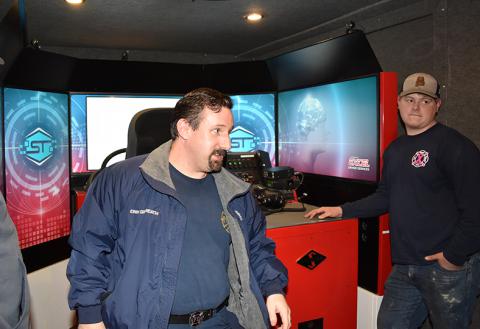 Erik Gilbreath has completed a program on the simulator. Corey Robins stands to the right.

WINSTON COUNTY - When there is a fire, the fire department is called, and they respond. But what happens when no one answers? There is a current need for fire departments across the nation, to which the younger generation is not responding to as in times past.

Several different areas have been looked at in making it interesting and appealing to them. For instance, there is a free mobile driving simulator service from the Alabama Fire College of Tuscaloosa which can be moved to any fire department. It is a simulator in driving a fire truck responding to a call. All the lights, sirens and even the steering wheel which are in a normal fire truck are included.  The “windows” looking out are the screens in which the user responds to. There can be people walking in front of the fire truck or have a tire blowout as the user “drives” to the scene of an accident.

Another idea is to have a type of cadet class in vocational schools in the area, though nothing concrete has been adapted.

Five fire departments have been looked at in Winston County. Statistics have been gathered on the average age of all fire fighters in the following departments:

While there are a few in their 20s sporadically, the average age is still 40.

Those younger volunteers will gain insight and interest in becoming long-term members of the emergency services in the community, provide fire departments with additional help and accomplish certain tasks, have leadership development for ­tomorrow and educate the public on the importance of volunteerism, according to James Garrison, president of the Winston County Fire Fighters Association.

During the last week of January, the AFC brought the driving simulator to Ashridge Volunteer Fire Department, the first time it has ever been located at this department. Fire departments from Winston County assembled the three nights they were there to train on the simulator with SimTech (Simulation Technology) software. The AFC has a purpose to help instruct and train fire fighters.

“The AFC has a list of classes we can set up through them to come to our or other departments and train us on,” Roger Watts of AVFD said. “It’s a good opportunity to teach our less experienced personnel to get a feel of what it could be. It’s not like you’re out there driving a car.

These things are 30 feet long. Our tanker is 33 feet long and pushing 16,000 lbs. in just water alone, so it’s something to get used to and to give them good habits while they are driving.”

“Winston County has 11 volunteer fire departments, and everyone of them are in dire need of volunteer firemen,” Garrison explained. “Every department is faced with a lack of  young men stepping up to help their communities. There’s something everybody can do: operate trucks, help control traffic, carry a bottle of water, help with fund raisers and even wash trucks. If only I could put into words the adrenaline rush of going  into a burning building or the  satisfaction of helping a neighbor in one of the most traumatic times of their life, whether it putting out a fire, saving thier home or climbing into a wrecked car to help get them safely out and into an ambulance. There is nothing like the feeling of helping someone in need.”
For more information, visit alabamafirecollege.org or call 800-241-2467.