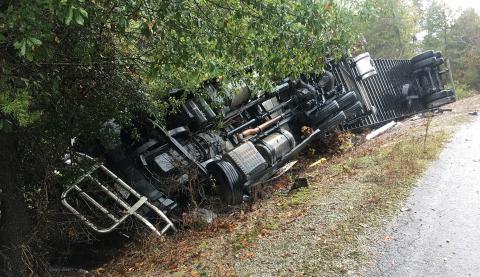 The Freightliner overturned just off Newburg Road after going around a sharp curve.

Gurmukh Singh, 60, of Fresno, California, driver of the Freightliner, was partially ejected through the front windshield of the rig and was rescued by passenger Sukehpal Singh, 23, also of Fresno, who had been able to escape through the busted out out windshield, he said.

Sukehpal noted the truck had come around a sharp curve on the Franklin County side of Newburg Road traveling toward Winston County, when it began to wobble then overturned off the right shoulder of the road. The truck landed on its side on a 20 foot embankment just off Newburg Road.

“The roof was popped open,” Sukehpal recalled. “I got out first then I helped him to get out.”

Medics came on the scene and treated both the driver and passenger, but neither had to be transported for any further treatment, they said.

The truck was hauling roughly 30,000 pounds of frozen chickens from Pilgrims Pride in Russellville heading towards a poultry company in Martin, Mississippi, the passenger said.

A trooper from the Alabama Law Enforcement Agency investigated the scene. A  man driving behind the Freightliner came upon the accident. “(The truck) was already laid down when I got here,” he said. “They were coming around the front of the truck when I got stopped.”

The bystander directed traffic until fire departments could arrive on the scene. The bystander had contacted Franklin County authorities when he came upon the accident.