Sealed proposals will be received by the Winston County Board of Education, until 2:00 P.M., legally prevailing time, on June 21, 2022 for the Corridor Flooring Renovations for Winston County Schools in the Board Room at the Winston County Board of Education, 25101 Highway 195, Double Springs, Alabama, at which time and place they will be publicly opened.
A cashier’s check or bid bond payable to Winston County Board of Education in an amount not less than five (5) percent of the amount of the bid, but in no event more than $10,000, must accompany the bidder’s proposal.  Performance and Payment Bonds and evidence of insurance required in the bid documents will be required at the signing of the Contract.
Drawings and Specifications may be examined at the office of the Architect, Ward Scott Architecture, Inc., 2715 7th Street, Tuscaloosa, Alabama, and TuscaBlue, 1926 University Boulevard, Tusca- loosa, Alabama.
Bid documents may be obtained from TuscaBlue via www.ward-scott
plans.com, upon deposit of $150.00 per set, which will be refunded in full on the first two sets issued to each trade contract bidder submitting a bona fide bid, upon return of documents in good condition within ten days of bid date.  Other sets for contractors, and sets for dealers, may be obtained with the same deposit, which will be refunded as above, less cost of printing, reproduction, handling, and distribution.
Bid bonds are to be issued by an acceptable bonding company licensed to do business in the State, with a Power of Attorney, to confess judgment thereon, with the understanding that it shall guarantee that the bidder shall not withdraw his bid for the guarantee period of sixty (60) days after the scheduled closing time for the receipt of bids; that if his bid is accepted, he will enter into a formal contract with the Owner, and that in the event of a withdrawal of said bid within said period, or the failure to enter into said contract within the  time specified, the bidder shall be liable to the Owner for the full amount of the bid guarantee as liquidated damages and not as a forfeit or as a penalty.  The bid bond and certified checks on unsuccessful bidders will be returned upon awarding the contract or rejection of all bids, in no event, later than the number of days in the guarantee period from the opening of proposals.  That of the successful bidder will be returned when formal contract and bonds are accepted and approved.
Bids must be submitted on proposal forms furnished by the Architect or copies thereof.  All bidders bidding in amounts exceeding that established by the State Licensing Board for General Contractors must be licensed under the provisions of Title 34, Chapter 8, Code of Alabama, 1975, and must show evidence of license before bidding or bid will not be received or considered by the Architect; the bidder shall show such evidence by clearly displaying his or her current license number on the outside of the sealed envelope in which the proposal is delivered.      The Owner reserves the right to reject any or all proposals and to waive technical errors if, in the Owner’s judgment, the best interests of the Owner will thereby be promoted.
All Bidders are invited to attend a non-mandatory pre-bid conference to be held in the Board Room at the Winston County Board of Education, 25101 Highway 195, Double Springs, Alabama at 10:00 A.M. on June 14, 2022.  The bidder's company employee attending the pre-bid conference shall have qualifications and experience with the construction to be performed within this project.  Any questions concerning the pre-bid conference shall be directed to the Architect.
Nonresident bidders must accompany any written bid documents with a written opinion of an attorney at law licensed to practice law in such nonresident bidder’s state of domicile, as to the preferences, if any or none, granted by the law of that state to its own business entities whose principal places of business are in that state in the letting of any or all public contracts. 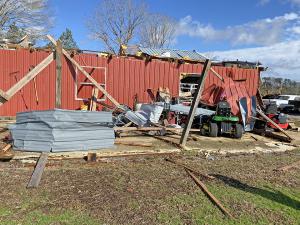