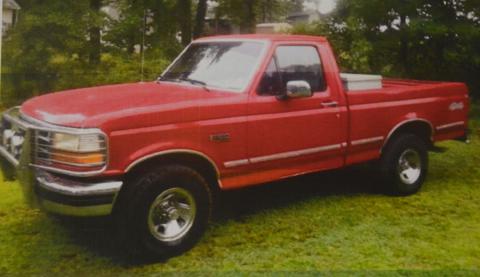 The vehicle is being described as a red 1994 Ford F-150 four-wheel-drive with license tag #49AP284.
HALEYVILLE - Law enforcement are seeking the whereabouts of a faded red 1994 Ford F-150 truck that was stolen sometime Wednesday morning, June 13, from the boat launch area at Quarter Creek. Sometime between the hours of 6:30 a.m. and 10:30 a.m., the Ford was stolen from the Quarter Creek boat ramp on Dime Road, noted Haleyville Police Chief Kyle Reogas. The truck, which has a brush guard on the front, has a license tag reading 49AP284, Reogas noted. The owner of the vehicle had parked the truck in the boat launch parking area and had gone fishing, Reogas said. “When he returned to the boat ramp, it was then he discovered his truck missing,” he said. The suspect or suspects unhooked the boat trailer from the truck and apparently used forced entry into the truck in order to steal it, due to the fact the owner had locked his truck and had the keys to the truck in his pocket, Reogas said. A photo of the he vehicle, which was described as a dull faded out red in color, was posted on social media, but the truck was newer at the time the photo was taken and was a brighter red in color, police indicated. “We did receive information that the truck was seen on County Highway 79 headed into Franklin County, and that was somewhere around 9 a.m. Wednesday,” said Reogas. A description of the truck was placed on the National Crime Information Network, for law enforcement to be on the look for a truck matching this description. If anyone sees a truck matching this description, they are urged to contact their local law enforcement agency or the Haleyville Police Department at 205-486-5201. “We’ve had numerous reports over the years of vehicles being broken into and items stolen from inside from vehicles parking in parking lots, but this is the first time we’ve actually had a vehicle taken,“ Reogas said. No personal items were reportedly in the truck at the time it was stolen, according to Reogas.