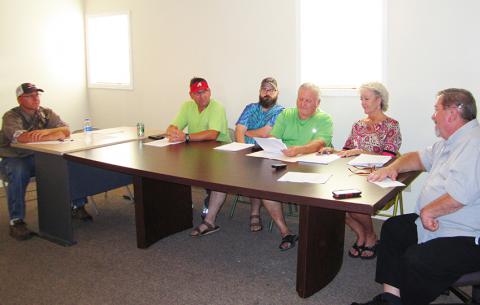 LYNN - David Roberson, chairman of the Winston County Development Board, spoke at the town meeting of Lynn on June 18, and discussed the abatement process for Winston Machinery, owned by Jeff Richards.

“We’re trying to push the abatement through in a quicker timeframe than normal, because (Richards) is trying to expedite his move and place the building in service,” Roberson said referring to the soon-to-be new location.

“He has currently purchased property on the ad valorem rolls for the city and county, but it’s been vacant and not being used. Because it’s a new location for him, it qualifies as a new project,” he continued.

The rules specifically state the abatement will apply if the property is placed in service before the granting of the abatement, Roberson stated.

The draft copy will be sent to Jeff Mobley, who is the city’s attorney, to make sure it is accurate and ready for submission.

According to Roberson, Richards’ intentions are to renovate the former Precision Husky building, which was the former Winston Machinery building in the early 2000s. He is also going to spend an additional $700,000 over the next year to expand his capacity and capabilities. He plans to add more employees.

Also included is an abatement for taxes on sales tax and use tax on material for renovating.
“It’s not a large abatement.  At the same time, it’s a big help to a small business that’s trying to get up and running,” Roberson said.

The Town of Lynn is the granting authority on the abatement. As long as it meets the technical requirements of the law and is timely filed, the county is virtually obligated to consent, along with the State of Alabama, according to Roberson.

After the discussion by Roberson, a motion was made by Tommy Chambless and seconded by Chris Little, council members, to approve the abatement for Winston Machinery for 10 years, contingent on the approval of Jeff Mobley. There were no objections, and the motion passed.