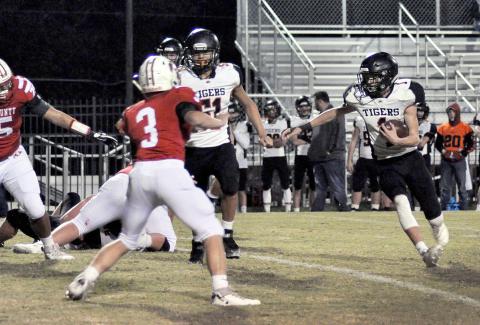 By Jesse Lamar
Courtesy of The Journal Record
GUIN - The Marion County Red Raiders snapped a four-game losing streak on Friday, Oct. 18, with a hard-fought 35-20 win over the Tigers of Meek High School.
The Red Raiders, who are now 5-4 on the season and 3-3 in region play, got off to a hot start in the Class 1A, Region 6 matchup, opening the contest with a commanding 20-0 run.
The Tigers had two scores in the second half, but the rally wasn't enough as they eventually fell to the hosting Raiders.
Following the game, fourth-year head coach Kyle Williams was very pleased with his team, but knows they still have to improve as they aim for a spot in the playoffs.

"I'm glad we were able to get back in the win column. Our guys played well in the game, but we have to continue to get better this week in practice. This is our first playoff game. We've got to win to have a chance to make it into the postseason," Williams said.
The Red Raiders started the game with a score on the opening drive of the contest. After electing to receive the opening kick, the Raiders had the ball on their own 47 following a 15-yard return by AJ Berry. It took the Raiders six snaps to find paydirt as they marched down the field.
Zachery Hines capped the drive for Marion County with an eight-yard dash to the end zone. The PAT was no good, leaving the score at 6-0 with 9:12 left in the opening period.
Marion County added another score before the end of the first quarter with a 24-yard connection between junior quarterback Deuce Belk and senior wideout Jerry King. Belk connected with William Smith for the two-point conversion, giving MCHS a 14-0 lead with 47 seconds left in the first quarter.

The Tigers threatened to score again before the end of the half, driving the ball inside the Marion County 10.

Meek pulled within six points of the Raiders on their opening possession of the second half when Waldrep connected with Tommy Daniel for a 61-yard touchdown reception. Waldrep passed to Bryson Hudson for the two-point conversion, and the Tigers had closed the gap to 20-14 with 11:16 left in the third quarter.
The Red Raiders made sure momentum stayed on their side of the field on its ensuing possession using a 14-yard connection between Belk and Smith for the score. Belk carried over the two-point try and the Raiders cushioned their lead at 28-14 with just over five minutes remaining in the third quarter.
Marion County rounded out its scoring for the night a possession later. After forcing a Meek punt, the Red Raiders cashed in on a short field opportunity with a nine-yard carry from Belk. Belk booted through the PAT, making the score 35-14 with 1:36 left in the third quarter of play.
The Tigers added the final score of the game in the fourth period when Waldrep passed to Hudson for a 17-yard score. The Tigers were no good on the two-point try, leaving the score at 35-20 with 9:35 remaining in the game.
This week, the Red Raiders will travel to Berry High School to face off against the Wildcats in their final regional matchup of the season. The Wildcats are 5-4 on the season and 4-2 in regional play.