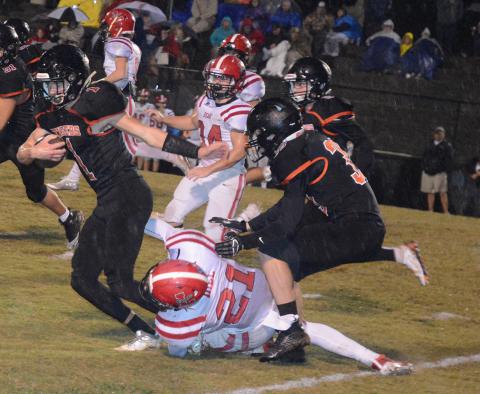 Matthew Clark is on the carry for Meek, with Brandon Hill on the tackle for Lynn.

ARLEY   - The Lynn Bears came in with the rain and put the Meek Tigers out to dry, dominating the game 35-12, on a rain soaked turf Friday night, Oct. 25.
As Milli Vanilli once improvised “Blame it on the Rain,” the story for Friday night was mostly captured from the rain--creating a muddy field, coaches and players sloshing through the murk and a scant crowd of spectators wearing heavy rain gear and gathering under tents and umbrellas.
On the field, coaches in heavy rain gear and boots rallied their teams in the traditionally griddy county rivalry that ended the season for the Tigers.
The Bears are 4-5 on the season and 3-4 in the region with one more game to play.
Meek ended their season 0-10 and 0-7 on the region.
Most all county teams had opted to play Thursday night due to Friday’s rain threat, but Meek faced a conflict with their team playing in the area volleyball tournament the same night, so they toughed it out.
And toughed it out they did.
The Bears received the opening kickoff, downing the ball near midfield. Micah Cagle started the Bears off with a carry at right moving the ball deep into Tiger territory at the 29-yard-line.
Carson Legg found plenty of leg room up the middle, but Tiger defenders were ready on his next move.  Cagle and Legg swapped out carries throughout the drive, edging the ball deep to the Tiger 10.
Legg then put on the stride, crossing the line with 7:02 left in the first quarter.  Brandon Hill toed the PAT, parting the uprights for 7-0, Bears.
Although the turf was slippery and assistants and ball boys fought to keep the football wrapped and dry amidst mother nature’s pounding rain, turnovers on the night were few.
However, the Tigers fumbled on Matthew Clark’s return. The Tigers recovered, keeping control at their own 35.
Quarterback Stuart Waldrep connected with James Brown for a “feel good” catch, but the Tigers ended up losing yardage and being forced to punt back from their own 20.
The Bears took control from their own 19. Brandon Hill overshot the ball intended for Griffin Lynn, and the Bears were forced to punt.
The Tigers couldn’t gain momentum on their next set. Although the Bears were hit with a pass interference call, the Tigers were hit with two holding penalties on the drive, so the Bears took over on downs from their own 24.
The Bears livened things up a bit on their next possession, which turned into a scoring drive on nine plays. Key plays were from Cagle, Hill and a mean dart at right for Lynn (Griffin) putting the ball in good field position for the Bears at the Tiger 25.
The Bears were knocking at the door thanks to Legg’s carry, when Cagle got the ball and crossed the line with 5:49 left in the second quarter.  Hill’s PAT made it 14-0, Bears.
Possessions went back and forth on downs for the remainder of the first half, as both teams headed to the locker room with the Bears leading 14-0.
The Tigers got the ball to start off the third quarter from their own 35, but  Waldrep was pulled down for a one-yard loss on the keeper.
The Tigers just weren’t going anywhere, when Waldrep faked the punt and rushed for a first down, resulting in a Tiger holding call, backing them up to their own 25.
Bear defenders had Waldrep’s number, putting on the pressure and forcing him to fire incomplete intending the pass for Clark.
Waldrep connected with Bryson Hudson, but the play wasn’t enough, and the Bears took over from their own 45.
The Bears, this time, capitalized on their possession on a scoring drive of 55 yards, executed in six plays. Key plays of the drive was a handoff from Hill to Legg, who found ground  deep to the Tiger 30.
Legg fell into cramped space on his next carry, but Hill darted left and found the uprights with 4:59 left in the third quarter. He also toed the PAT for 21-0, Bears.
Bear defenders put the pressure on the Tigers’ next possession forcing the punt after five negative yards on the set.
The Bears started off with good field possession at the Tiger 48 and scored in just three plays. John Linley found space at left to the Tiger 30, when Jaydon Tidwell plowed through to score with 1:16 left in the third quarter. Hill’s PAT once again parted the uprights, and the score was 28-0, Bears.
The Tigers were struggling on their next drive. Just after being hit with a holding call, backing them up to their own 35, Hill stepped in for the Bears picking off a pass and finding 10 more yards out to their own 42, as the third quarter expired.
Griffin Lynn attempted the carry but was met at the line, and Tiger defenders pounced on Legg’s attempted carry. Legg and Cagle got the ball within scoring range, when Legg broke three tackles and crossed the line with 7:41 left in the game. Hill’s PAT made it 35-0.
The Tigers avoided the shutout. On their next drive, Tommy Daniel returned the ball amid danger to their own 36.
Waldrep then darted on the keeper 65 yards to the uprights, with 6:38 left in the game. Waldrep was sacked, so the two-point conversion failed, leaving the score 35-6.
The Tigers forced the Bears to punt after five negative yards on the set, giving the Tigers an opportunity to score once again.
The Tigers took control from their own 10 and Clark quickly gave the Tigers more space.
The Tigers were at their own 25, when a complete pass to Trinton Ory sent him 60 yards to score with 1:58 left in the game. Waldrep could not connect with  Hudson, so the two-point conversion failed, leaving the final score 35-12, Bears.