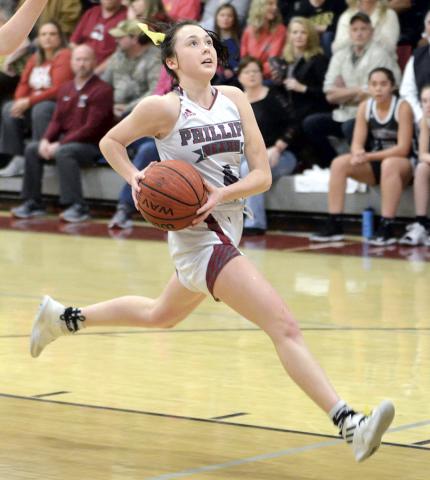 Mary Ashton Hyde sets her launch to the goal for the Phillips She Bears.

By Casey Mills
Courtesy of
The Journal Record
BEAR CREEK - The Phillips Bears and She Bears both battled their way into the finals of the Marion County Basketball Tournament, held at PHS Friday, Jan. 24, but the games did not end in the hosting teams’ favor.
The Winfield Pirates and the Hamilton Lady Aggies were named the 2020 Marion County Basketball tournament champs after competing in the single-elimination tournament last week. Varsity teams from each high school in Marion County came together for the fierce competition starting Monday, Jan. 20, for the first round, Thursday, Jan. 23, for the semifinals, and finally closing out the tournament with the championship games.

The Class 3A No. 9-ranked Winfield Pirates downed the Phillips Bears 80-33 during the championship game of the tournament.
The Pirates opened the contest against the Bears 11-8 followed by a Winfield 34-point second quarter compared to Phillips only getting 10 points int he second.
The Bears were held to a 13-point third quarter while the Pirates added 17 points toward their lead. In the last frame, Winfield outscored Phillips 18-3, giving the Pirates their 80-33 victory.
Winfield’s Graham Bradford was the top scorer of the game with 27 points.
Brady Franks was next on the Pirates’ scoresheet with 12 points, followed by Tucker Chaffin with 11 points.
Logan Feltman completed the game with 10 points. Taylor Chandler brought in six points and Luke Bradford had five points for Winfield in the win.
Andrew Rasnake contributed three points. Luke McKinney and Jase Doss scored two points each.
Phillips’ Hayden Hulsey and Pol Baldrich finished the game with eight points each. Ken Edwards scored six points while Brodie Coan and Alex Copeland had four points each.
Collin Grace and Jose Aagon contributed two points apiece.

Game 1:
The Hackleburg Panthers and the Hamilton Aggies kicked off tournament play for the boys with their first matchup of the season. Hamilton bagged a 70-32 victory over the Panthers, advancing them to the semifinals.
The Aggies’ defense held Hackleburg to just seven points in the first half of the game, while Hamilton brought in 25 points.
Returning from the break, the Panthers put up 17 points against the Aggies in the third frame.  However, Hamilton continued to advance toward their 70-32 victory.
Kenton Steele led the Aggies with 21 points over the Panthers. Elijah Whitley completed the game with 13 points and Jayden Loving had 10 points.
James Metcalf and Audie Crane contributed eight points each, while Bryant Loving brought in four points for the Aggies.
Jordan Cross, Austin Gentz, and Luke Brumley scored two points apiece.
Hackleburg Panther Eli Taylor finished the game with nine points. Gavin Pyburn brought in eight points.
Anthony Whisenant scored six points in the defeat. Christopher Limberakis contributed four points, Caden Jones added three points, and Daniel Cooper had two points.

Game 2:
The Marion County Red Raiders were put away 68-65 by Phillips’ Edwards last-second, three-point shot after a fierce matchup.
Phillips outscored the Red Raiders 17-11 in the first frame. Marion County followed with an 18-point second quarter while holding the Bears to 13 points, bringing the teams to a 30-29 Phillips’ advantage at halftime.
The Red Raiders posted 18 points in both the third and fourth frames. The Bears were allowed only seven points in the third quarter, but after a 31-point fourth frame, the Bears were able to recover enough to claim the 68-65 win on Marion County.
Edwards was the top contributor to the game with 19 points.
Copeland and Hulsey aided the Bears with 14 points each.
Jose Aragon ended the game with eight points. James Grace scored six points. Baldrich added three points toward the victory.
Jonathan Coan and Tanner Markham had two points each.

The Phillips Bears defeated the Brilliant Tigers 78-55 in Brilliant’s only game of the tournament.
Brilliant trailed Phillips 15-13 at the end of the first quarter, but a 24-point second frame pushed the Bears past Brilliant to a 37-27 lead at halftime.
The Tigers made strong efforts  during the remainder of the game to close the gap,  but were outscored 18-16 and 23-12 in the third and fourth frames, respectively.
Copeland led the Bears with 22 points followed by Grace with 17 points. Hulsey contributed 10 points, Edwards scored nine points, and Baldrich had eight points. Aragon brought in six points for the Bears. Coan scored four points and Lucas Atkins had two points.
Brilliant’s Kade Bryant finished the game with 12 points. Braden Burleson scored 11 points and Trevor Barton had 10 points in the loss. Braden O’Mary completed the game with eight points. Preston Conniff brought in seven points. Wiley Hanson had six points.

Game 2:
The Hamilton Aggies fell to the Winfield Pirates in the last semifinal game of the tournament. The Pirates took a 52-34 victory over Hamilton after strong defensive efforts.
The teams stayed close in the first half of the game, only allowing eight points each in the first quarter. By the third quarter, however, the Pirates had gained a 36-24 lead over the Aggies.
Hamilton was outscored 16-10 in the last frame, giving the Pirates their 52-34 victory.
Winfield’s Graham Bradford and Feltman led the Pirates over Hamilton with 17 points each.
Franks scored seven points, Chandler completed the game with six points, and Luke Bradford had three points. Chaffin contributed two points

toward the win.
Hamilton’s Bryant Loving and Kenton Steele brought in 10 points each against the Pirates.
Caleb Weeks scored six points. Jayden Loving contributed four points. Elijah Whitley completed the game with three points while Christian Loving had one point against Winfield.

Strong efforts from the Hamilton Lady Aggies gave them the edge they needed to defeat the Class 1A No. 9-ranked Phillips She Bears 65-56 in the championship game of the tournament.
The Lady Aggies took a 20-13 lead over the She Bears in the first frame and never looked back.
Phillips put up an impressive 16-point second quarter to close the gap and bring the teams to a 32-29 Hamilton advantage at halftime.
Hamilton outscored Phillips 24-17 in the third frame, bumping the Lady Aggies up to a 56-46 lead.
The She Bears put up 10 points over Hamilton in the last frame. Unfortunately, it wasn’t enough to prevent the Lady Aggies’ 65-56 victory.
Anna Grace Frost, Mia Hollingsworth, and Paisley Sorrells led the Lady Aggies to victory with 16 points each.
Aubrey Sorrells finished the game with 10 points against the She Bears. Lydia McLin scored four points and Jasmine Wilson had one point in the win.
Phillips’ Ally McCollum was the top scorer for the She Bears with 18 points. Allie Temple scored 17 points and Gracie Hallman added 13 points.
Mary Ashton Hyde contributed six points and Allie Veal had two points.

Game 1:
The Hamilton Lady Aggies won a hard fought game against Winfield in the opening contest of the tournament that undoubtedly set the tone for the rest of the games.
Hamilton defeated the Lady Pirates 63-59 in a redemptive matchup. Earlier this month, the Lady Aggies fell 65-54 in the teams’ first contest of the season.
By halftime, Hamiton had gained a 36-28 advantage over Winfield. However, the Lady Pirates returned from the break with a 23-point third-quarter bringing the teams to a tie at 51 heading into the fourth frame.
Winfield put the Lady Aggies in bonus shots with fouls in the last frame of the game, giving Hamilton the edge it needed to secure its 63-59 victory.
Hollingsworth led the Lady Aggies with a 28-point game. Aubrey Sorrells completed the game with 18 points and Frost scored 11 points.
McLin contributed five points toward Hamilton’s victory. Paisley Sorrells had one point.
At the top of Winfield’s scoresheet sat Emma Tittle with 22 points. Abbie Grace Junkin, Jenna Ayers, and Presley Guin would each contribute 11 points.
Anna Crumpton and Kristen Wilson scored two points each.

Game 2:
The Marion County Red Raiders and the Phillips She Bears picked up exactly where the first game left off with a heated, competitive game. The Lady Red Raiders suffered a tough 76-74 loss after Phillips’ McCollum secured two points in the last seconds of the game.
Marion County took a 15-10 lead in the first frame, followed by the She Bears stealing the advantage with two 22-point quarters in the second and third frames.
In the last half of the game, Phillips’ Hallman sunk five 3-point shots in a row, undoubtedly aiding the She Bears to obtain their 76-74 win.
Lady Red Raider Cara Sullivan was the top scorer of the game with 27 points.
Erin Culp contributed 19 points and Trinity Metcalfe had 10 points. Madison Stewart completed the game with 10 points for the Lady Red Raiders.
Bretta Taylor and Tori Taylor scored five points each.
Phillips’ Hallman boasted 24 points in total against Marion County, followed by Temple with 20 points.
McCollum brought in 17 points for the She Bears. Morgan Lauderdale scored eight points, Mary Ashton Hyde contributed five points, and Allie Veal had two points in the contest.

Game 1:
The Phillips She Bears qualified for the championship game after defeating the Brilliant Lady Tigers 68-32 in the first semifinal game of the tournament.
Phillips’ Hallman was the top scorer of the game with 23 points, Temple scored 18 points, and Hyde had 17 points. McCollum brought in 10 points for the She Bears.
Brilliant’s Abby Humphries and Carrington Barnett contributed 10 points each in the loss.
Tatum Barton completed the game with six points. Azia Handley scored three points, Natalie Beasley added two points, and Indee Kois had a point for the Lady Tigers.

Game 2:
Hollingsworth’s 28-point game led the Lady Aggies to a 51-33 win over Hackleburg, knocking the Lady Panthers out of the tournament.
The Hackleburg Lady Panthers were simply outmatched. Hamilton led 18-10 after the first quarter and never looked back.
Aubrey Sorrells brought in 11 points. Jasmine Wilson and Paisley Sorrells scored three points each for Hamilton in the win.
McLin, Frost, and Ella Kelley finished the game with two points each.
Hackleburg’s Alexis McCarley was the top scorer for the Panthers with 17 points.
Abbie Mitchell and Anna Rivera completed the game seven points each. Saylor Cooper scored two points for Hackleburg in the defeat.