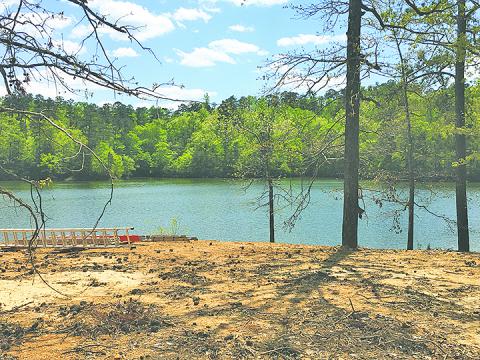 The Winston County Board of Education is currently accepting offers for the sale of the 16th section of property which is located on Yellow Creek near the Houston Recreational area of Smith Lake.

Pendley’s action to accept proposals for the 16th section of property was questioned by Addison resident Kyle Woodard.
“It’s not that much of a deal to me (that) they are selling it. I feel like the public has not been educated on why they are selling it or about them selling it,” Woodard began. Woodard had in his hand a copy of the bid proposal, he said.
“It’s nearly like it’s secretive,” he pointed out. “The bid supposedly states it’s 173 plus or minus acres they are selling. Supposedly, it’s prime lakefront property,” said Woodard.
“And they are taking sealed bids on it. It doesn’t make sense to me that we’ve got some prime lakefront property and we’re going to  sell it secretively. We are not going to advertise it,” Woodard continued.
“We’re not going to promote it. We’re not going to have a live auction.  It seems like there’s a lot of fishy stuff going on,” Woodard pointed out.
“If I am going to present this to the public from a superintendent’s standpoint, I want to get all of the money I can possibly get for this land,” he continued.
Woodard exclaimed the sale of the property should be public or publicly advertised because the proceeds benefit a public school system.
Woodard also questioned the criteria in which the statements for proposals were sent out.
“Our school board members don’t even know about it. How did other people find out about it?” Woodard questioned.
“It’s almost like Greg Pendley has him a buyer picked out already that’s going to buy this property and pad his pocket,” Woodard pointed out.
“I don’t care what they get for (the property), but I feel like the principals, the school teachers, parents, the kids, all stakeholders involved, have an obligation to know they are going to be selling it and, after we sell this land, what are we spending it on,” Woodard pointed out.
“Are we buying new trucks for the school board? Are we giving the superintendent a raise? Or are we spending it on our kids for textbooks, to get better ChromeBooks? What are you doing with the money?” Woodard asked.
“You don’t just up and sell your nest egg because your superintendent wants to,” Woodard said.
Winston County Commission Chairman Roger Hayes noted the decision to sell the 16th section property was a local board of education decision.
“What matters is the public, what their thoughts are on it,” Hayes said.
“That is what they’ve got a school board for,” added Hayes. “The people elected them. Surely, they will address anything that anyone has to be addressed about it.”

Board gave Pendley authority to
proceed with
sending out for bids

Winston BOE President Joey Boteler refuted the claim that the idea of bid proposals was only Pendley’s. He stated the board had already given Pendley the authority to proceed with sending out the property for bid.
“He can’t sell it until we make that final decision,” Boteler pointed out. “We told him to go ahead and put it (out) and see what we could do.
“Just because we put it out on the market doesn’t mean we are going to sell it either,” Boteler pointed out.  “It will be a local board decision.”
Boteler described the unique financial opportunity for the board, if the property does sell.
“It’s according to what price it might bring,” he said. “What it can do for the board is for the future, to be some income we could use if times got bad again.
“We can invest that so the future of the Winston County  school system may not have to struggle the way we have struggled over the last 20 years,” Boteler added.
“There were times where we had to let teachers go.  Maybe if this sells for what it can, that can be a cushion we can fall back on,” Boteler said.