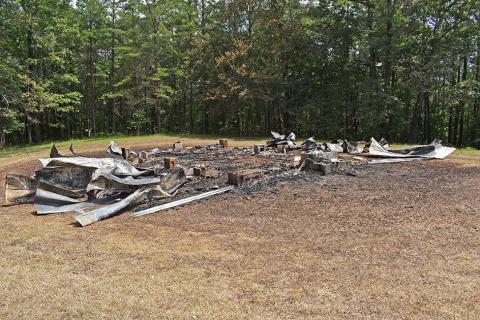 Foundation blocks, rolled pieces of glass (from the heat) and rubble is shown from the scene of the fire.

NAUVOO - Investigation is underway into a fire which has completely destroyed a landmark church.
Nestled in the country on the Rocky Plains at 600 County Road 330, the small, one-room Rocky Plains Church burned Wednesday night, June 9.
The wooden building, which had not been used as a church for many decades, still had pews, a pulpit and a piano within it. Some descendants of the originators of the church building were planning on repainting it when it burned. A month prior, a set of hymn books had been taken out of the church by the descendants. Now, those are all that is left of the building worth salvaging.
The destruction of the historic building is a blow to Kevin Thomas, whose grandfather helped construct the building. Thomas was at home when he was notified the church had burned. He arrived to the smoldering ruins within minutes of hearing of it.
“Everything was still in there,” he said. “The pews, the hymnbooks, everything.” What was left of the piano was the bottom metal base.
“When the (Winston County Sheriff’s Office) deputy got here with me (Wednesday night), it was dark, and there were still embers in the back. It got hot.” Thomas pointed to the leaves and pine needles on the trees surrounding the remains, which had turned brown. The last time Thomas had been to the church was the Saturday before it burned.
Driving in to the cemetery area on County Road 330, the front door of the church faced west, had two windows on the back and four windows on each side. The driveway then led behind the church and looped back to the main road. The building was 16 feet in width by 26 feet in length.
According to newspaper records of the 1950s, religious services had once been held in the area, but due to the fact many people moved away, they were discontinued. Evidence of a church appears in member Elizabeth Gann's letter of dismissal from the Missionary Baptist Church of Christ at Rocky Plains dated Nov. 26, 1910. The moderator of the Clear Creek Baptist Association at that time, who signed the letter was H.L. "Dock" McCrary.
No building existed on decoration day, May 26, 1951. However, a basket dinner was held at the cemetery with singing and preaching, with several ministers planning to attend. The dinner was held at the residence of J.M. Thomas, who lived next to the cemetery.