Remember the fallen, thank the living 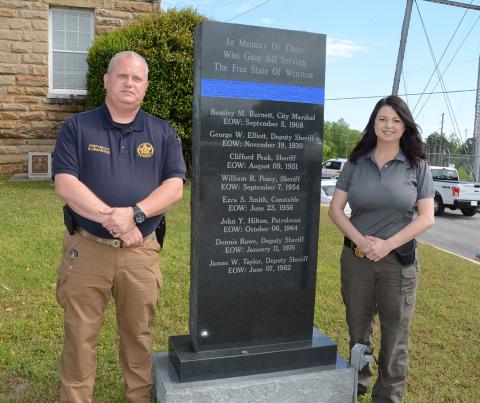 Winston County Sheriff’s Chief Deputy Bryan Kirkpatrick and Sheriff’s Office Clerk/Event Organizer Misty Fannin at the monument which will be the focal point of the ceremony.

DOUBLE SPRINGS  -  “Remember the Fallen, Thank the Living” is the theme for this year’s National Police Week, which will be May 12-18. Winston County is planning a special ceremony honoring its fallen officers, with two new names to be added to the list of those who died in the line of duty.

The fallen officer memorial on the front lawn of the Winston County Courthouse  will be the focus for an impressive ceremony Saturday, May 11, at 8 p.m., with the event being held at nightfall  for  a special reason, noted Winston County Sheriff’s Office Chief Deputy Bryan Kirkpatrick.

During the entire ceremony, the Winston County Courthouse will be illuminated in blue, commemorating the Thin Blue Line each member of law enforcement treads with caution every day they serve.

Last year, the grand finale for the annual ceremony was the lighting of the courthouse in blue, so this year, the blue light will provide a fitting background for the entire ceremony, Kirkpatrick said.

“We are going to fly the Thin Blue Line flag,” Kirkpatrick said.

Sheriff’s Office Clerk Misty Fannin, who is organizing this year’s event, added that the courthouse will be illuminated in blue throughout National Police Week.

“I would like to invite all law enforcement, near and far, to come,” Fannin urged.

All law enforcement and emergency responders are invited to come early for a photo on the steps of the courthouse at 7:30 p.m., she said. This includes not just local law enforcement, but sheriff’s offices, police departments and other entities - including federal and state agencies - throughout the region and state.

“I will probably get the dispatcher to send out an administrative message through the NCIC (National Crime Information Center), inviting everyone to attend,” Kirkpatrick pointed out.
The highlight of the event, which is bringing so many agencies, as well as the general public, together is the fallen officer memorial, where a wreath will be placed by Winston County Sheriff’s Investigator Brad Curtis.

A rose commemorating each officer or member of law enforcement from Winston County who has died in the line of duty will be placed at the memorial by Rodney Lewis, with the Haleyville Police Department, Wesley Donaldson with the Winston County Sheriff’s Office and Winston County Constable Travis Alred.

Two new names are being added to the honors this year--Winston County Sheriff’s Office Dispatcher Lynn Vickery, who died of cancer June 23, 2018, and Lt. Robby Barton, a special agent with the Alabama Law Enforcement Agency, who died of a heart attack March 29, 2019.
When one who serves in these or other related capacities passes away, it is properly called The End of their Watch, Kirkpatrick noted.

Referring to Vickery and Barton, Kirkpatrick noted, “They weren’t killed in the line of duty, but they did lose their lives while on the job.

“We’re honoring them because they deserve our recognition,” Kirkpatrick pointed out.

“Robby worked in the county. He was part of the Region E Task Force.  Lynn was a 17-year veteran of the sheriff’s office in dispatch,” he added with pride. “She was an integral part of this department.”

Vickery and Barton will be honored with plaques, which will be displayed in the courthouse.
Curtis will speak as part of Barton’s tribute, and Tammy Hendrix will deliver the tribute for Vickery.

“(Vickery) was my dispatcher for the biggest part of my career. She was family,” Kirkpatrick noted, straining back tears.  “It was a loss...They both need to be recognized for what they have done.”

A special quote used to commemorate Vickery and Barton reads, “It is not how these officers died that made them a hero, it is how they lived.”

Winston County’s officers who were killed in the line of duty will also be honored, with family members and friends of each invited.

The names of the fallen are inscribed on the monument, which replaced an older monument on the courthouse lawn. The new monument was dedicated during a 2017 ceremony.

“I pray we don’t lose anymore,” Kirkpatrick said. “You never know when you can lose somebody. You never know it’s going to happen.”

“Yeah, you are going to be scared, but still you have to do it. You have a job to do,” Kirkpatrick said.

“You have to fight through that fear and remember the oath you took to uphold the law. You’ve got to honor that oath and protect life and property.

“Every officer who has paid the ultimate price in this profession deserves to be recognized...We are all a family.”

“It’s always good to remember the ones who have gone before us and to honor all of our officers, especially those who have risked their lives and lost them,” Robinson stated.

“The Elliott who is recognized (on the memorial), is a distant cousin of my mother’s on her side of the family, so it means a little bit  more to me than most people, and I know it does to all of the families,”  Robinson added.

Winston County Sheriff Tommy Moore noted that across the nation each day men and women get dressed and leave their homes to protect and serve the citizens of the country.

“You see different types of uniforms and badges, but we all have the same common goal - to make the world a better and safer place to live,” Moore stated. “A lot of officers leave their  home never to return to their families.”

“Over the years, I would be playing with my kids, talking to my wife or holding a grandchild and a thought would flash across my mind.  Could this be the last time?” Moore said.  “You always put that aside, put your trust in God and go out that door because you love helping people and protecting them.

"Unfortunately, some never get to complete their calling because they gave up their life trying to help or protect their fellow man,” the sheriff continued.

The format for the ceremony will include a welcome by Moore, followed by an opening prayer by Officer Greg Rooks.

The Master of Ceremony will be Winston County Constable Jerry Thorn, with the Presentation of Colors by Double Springs Boy Scout Troop 29, under the direction of Scoutmaster Larry Gillentine.

The guest speaker will be Fraternal Order of Police Vice President  Jim Rau, who will be followed by the playing of an inspirational song, “Never Let Up”.

Presiding Judge of the 25th Judicial Circuit Daryl Burt will be the next guest speaker.

Plaques honoring Barton and Vickery will be presented by Curtis and Hendrix, respectively.
The Memorial to the Fallen will be done by retired Winston County Deputy Jerry Covington followed by the playing of “Taps” on trumpet.

This will be followed by the most solemn part of the ceremony, including the laying of the wreath and roses.

A closing prayer will be given by Jeremy Glenn.

Refreshments will be served after the ceremony in the courtroom on the lower level of the Winston County Courthouse.