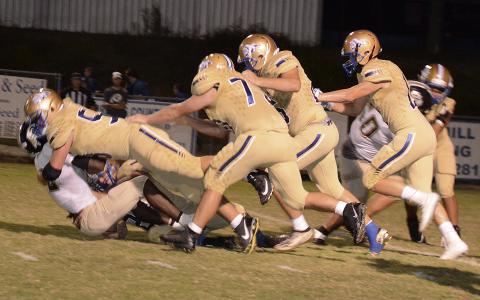 A host of Addison Bulldogs put a sack on a Colbert County Indian.

ADDISON -  The Addison Bulldogs may have been playing the Colbert County Indians, but the Bulldogs were on the warpath, dominating the scoreboard, with a majority of points scored in the third quarter to clinch their region win 44-12 Friday night, Oct. 4.
The Bulldogs, however, going into the game had been named literally the Underdogs in this tough regional matchup, but the Bulldogs ended up scoring more points defensively than offensively, seizing the opportunity on a myriad of Indian turnovers to take the lead and dominate the game.
Going into the game 1-1 on the region, the Bulldogs had their work cut out for them with a win over regional foe Sheffield and loss to Red Bay.
The win over the Indians Friday put the Bulldogs 5-2 on the season, but, according to Bulldogs Head Coach David Smothers, the Dawgs still have key games to win this season.
“We played much better,” Coach Smothers simply said after the win. “We had not been consistently playing, and we still had some hiccups tonight, but we played more consistently as a team in all phases of the game.
“We played good sound football,” Smothers continued. “The (Indians) coughed it up...We took advantage of it. When we got a turnover, we took advantage of it.”
The leading Dawgs on the night were Dayton Roberts with 38 passing yards, Watson Smith with 58 rushing yards and Nicholas Rice with 18 receiving yards.
Total yardage was close for both teams, with the Indians slightly above the Bulldogs, with the Bulldogs raking in 218 total to the Indians’ 223.
The Indians also had more passing yards at 137 to the Bulldogs’ 42.
The Bulldogs dominated in rushing yards  receiving 176 to the Indians’ 86.
Both teams were also close in the number of first downs, with Addison receiving 13 with their opponent Colbert County just one higher at 14.
The turnovers painted a vastly different picture between the Bulldogs and Indians. The Indians had four turnovers on the night, losing two fumbles and throwing two interceptions. The Bulldogs did not have any turnovers on the night.
The Indians received the opening kickoff, starting play from their own 29-yard- line, but the Indians’ first possession was short lived, as Bulldog defenders kept the Indians with three negative yards, forcing the punt.
The Bulldogs took the ball from their own 44-yard- line, with Caleb Crider trailing a host of defenders across midfield to the opponent 47-yard-line.
An offsides call backed up the Bulldogs five yards, and a loose ball off a high snap was recovered for a loss in the backfield by Crider, as the Bulldogs were forced to punt two plays later.
The Indians took control from their own 24. Brayden McGougal took them to a first down at their own 36, and the Indians struggled  trying to get to at least midfield amidst an aggressive Bulldog defense.
A pass sailed into the grip of Colton Chambers for the Bulldog interception, rushing to the uprights with 5:29 left in the first quarter. Elijah Howse toed the PAT for 7-0, Bulldogs.
The Indians on their next drive were facing 4th down at the Bulldog 45, when Jdarys Nance found space up the middle for a first down near the Bulldog 30, as the first quarter expired.
On a third down situation,  Themetri Carter pulled down a complete pass and darted to the Bulldog 10, as the Indians were now threatening deep in foe territory.
The Indians were backed up to the Bulldog 22 on a penalty and it looked like another third down situation, when Carter pulled another one out of the air and scooted across the line with 9:53 left in the second quarter.  Efrain Ramos’ PAT failed and the Indians trailed by one, 7-6.
The Bulldogs began their next drive with much aggression with a complete pass to Chambers, and Nicholas Rice’s quarterback keeper moved the ball for a first down near their own 41.
Rice kept for more yardage and a first down across midfield. Rice was the man with the plan, and the Bulldogs were now officially on the warpath mentioned earlier.
Crider was the carrier at left deep to the opponent 11 and a handoff sent Weston Smith  to a deep and threatening position for the Bulldogs, when Smith crossed the line to score with 4:06 left in the second quarter.  Howse’ s PAT failed, and the score was 13-6, Bulldogs.
The Bulldogs kept the Indians at a loss, forcing the punt leaving the Bulldogs with good field position near midfield.
Rice had great efforts, but the Bulldogs were forced to punt, after meeting a line up of angry, hostile Indians.
The Indians took over at their own 10 and a pass sailed complete to Jaylen Merritt for a first down at their own 30.
The Indians moved steadily downgrid and were facing 4th down at the Bulldog 30, with only 16 seconds remaining until half time,