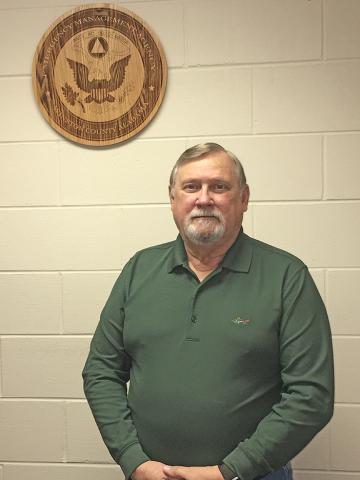 WINSTON COUNTY      - Jimmy Madison will be stepping away from full-time duties as Winston County’s emergency management agency director, but has been hired part-time in the role until a permanent replacement can be found.
Madison’s retirement as EMA director, effective Feb. 28, was approved by the Winston County Commission at their regular meeting Monday, Feb. 22.  The commission approved the change, listing it on their agenda as a resignation, then hired Madison as part-time EMA director at 19 hours per week, effective March 1.
In this role, Madison will be working to train the incoming EMA director.
“I am willing to work as long as I can,” Madison said. “I do enjoy the work, but family and financial issues prevent me from working full time.”
The commission then voted to begin accepting applications for an EMA director.

In a letter dated Feb. 16, addressed to the commission, Madison said has enjoyed working as the county’s EMA director since 2017.
“I would like to thank the Winston County Commission for providing a good working environment, and the opportunity to serve the citizens of Winston County as their director,” Madison submitted in his letter.
“One of my goals was to leave the office in better shape than I received it,” Madison noted.
The commission has already received several applications for the EMA director’s position and plans to continue to accept applications until this Friday, March 5, at 5 p.m.  After that, applications will be reviewed by commissioners and interviews conducted, with plans to hire a new EMA director at the Monday, March 29 meeting, noted Commissioner David Cummings.
“It’s a very critical position for the county,” he stressed. “It affects a lot of different departments in the county.”
Cummings expressed his appreciation to Madison for a job well done.
“He’s been someone I could count on, someone reliable,” Cummings said. “He will be missed. I hate to see him go. I want to wish him a good retirement.  Now, we have to move forward and find (the right) candidate to replace him.”
The commission is seeking someone who  is familiar with the emergency management system, as well as the process of applying for grants for emergency-related equipment or services, Cummings explained.
“We’ve got to have someone who will see the grants through after we receive them,” Cummings added.
The EMA director is the contact for what the county needs during a disaster or emergency situation, making that need a reality, commissioners said.  The EMA director has contacts at both the federal and state levels, keeping in close contact with other agencies and departments such as the National Weather Service and Department of Homeland Security, as well as legislators to coordinate resources in case of severe weather or any other type of emergency situation, commissioners further explained.
The job description of a county EMA director is to oversee and supervise the day-to-day and emergency operation of the local organization of emergency management and to coordinate and participate in the development and maintenance of related plans and procedures.
In his tenure as EMA director, Madison brought a wealth of services to the position through various grants.  In 2017, he obtained homeland security grants that provided each of the county’s law enforcement agencies a digital communication system.  Madison also obtained two separate homeland security grants to upgrade the emergency operations center, which is located in the Double Springs Municipal Building, with a multi-media system for advanced training, as well as replaced outdated computers with eight new Windows 10 computers.
“He did a great job. He was very thorough,” noted Commission Chairman Roger Hayes. “I hate to lose him.”
Commissioner Bobby Everett added that Madison was a veteran in his profession.
“He did a good job at the sheriff’s department, as well as EMA,” Everett stated. “It will be hard to replace him.  We’re thankful for the job he did, but we are looking forward with him helping us to find somebody and mentor that person.”
In 2018, the National Weather Service recognized Winston County as a Storm Ready County. This program helps community leaders and residents prepare for hazardous weather and flooding.  Storm Ready sites have made a strong commitment to implement plans and resources in an effort to save lives and protect property when severe weather strikes.
Madison was appointed by the Winston County Commission as EMA director, replacing the retiring James Burnett in 2017.  Madison earned his county level emergency manager certification through the Alabama EMA, as well as advanced level emergency manager certification through the Alabama Association of Emergency Managers.
Having also served as the county’s homeland security coordinator, Madison assisted  public safety professionals in all levels of government, public safety, first responders and non-profit organizations in all-hazard preparedness, response, recovery and mitigation.
After serving in the Army, Madison began his career in public service in 1978 as a firefighter and paramedic.  In 1983, he was promoted to fire marshal with the Forestdale Fire Department and in 1985, was employed with the Hoover Fire Department, where he was assigned to the heavy rescue team and certified as a hazardous material technician.
In 1995, Madison joined the Jefferson County Sheriff’s Office as a reserve deputy and worked as a tactical medic for the SWAT team for over 17 years.
Upon retiring from the Hoover Fire Department in 2005, Madison began his career in law enforcement.  He continued working with Jefferson County until 2010.  During this time, Madison attended training at Jefferson State Community College, studying in the field of forensic science, including criminal and crime scene investigations.
In 2011, Madison began work for the Winston County Sheriff’s Office, serving as lieutenant and being promoted to captain after one year.  He then served as patrol supervisor and then as chief deputy from 2014-2015.
Since that time, Madison has also worked for police departments in Lynn and Double Springs.
Madison served on the Winston County E-9-1-1 Board for two years, serving as vice chairman in his second year of service on the board.