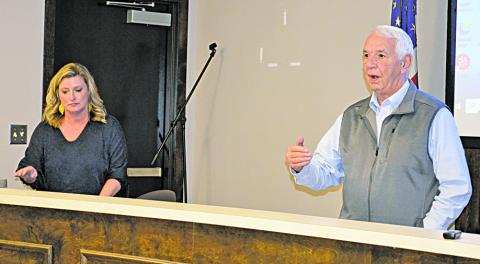 Fees in order for a community to participate in the Designated level are $7,500 the first year, $5,000 the second year, $3,000 the third year and $1,500 for every year after that.
All of the costs of the program are included in these fees, according to Black.
Neina Middleton asked whether or not the fees cover an additional market analysis if a community underwent leadership changes and if a community needed help.
Black responded it would cover those costs.
“What town do you have that is similar to our size that you would say is your biggest success?”  council member Dr. Ray Boshell asked.

Headland, with a population of around 5,000, became a Designated Main Street Community in 2019, Black said. “They had 17 businesses open in the district since 2019, and for a community that size, that’s pretty significant.”
State Representative Tracy Estes asked if Designated Main Street communities would be open to a local delegation visiting them.
“We actually have a big push on advocacy right now,” Black responded, “and really encourage our communities to have conversations and let their legislators know what is happening in their districts.”
“I was talking about a delegation group from this community,” Estes noted.
“We have that happen a lot,” Black responded.
About 227 new businesses opened in Designated Main Street areas from March 2020 to September 2021, with only 44 closing during the COVID-19 pandemic, Black explained.
“A lot of our Main Street directors were on the ground hustling for those businesses, making signs for curbside parking,” she said.
“The director in Athens worked with the city and they expanded dining down the sidewalks, even in front of retail businesses, for those restaurants to still serve people and still meet regulations,” Black further explained.
“It’s a good time for downtowns right now,” she pointed out.
Middleton then asked how the volunteer-based boards were developed.
Black answered that people going into the program are urged to think about their communities and who would be best to get involved.
In Athens, volunteer meetings were held among the core group to discuss and plan projects, she said.

Mayor Ken Sunseri addressed the audience, stating that Haleyville has been designated as an Opportunity Zone.
Prior to the pandemic, the city had a meeting set up for Opportunity Zone personnel to visit the city concerning a hotel the city is trying to get, Sunseri pointed out.
Plans for a meeting about the Opportunity Zone are currently in the works again, he stated.
Sunseri, council member Boo Brooks and Chamber President Mike Evans attended a retail academy to seek ways of redeveloping the city’s commercial district, the mayor said.
“We now have a listing of about 12 different buildings on there (so) that if you asked me about retail space, I can tell you what’s available and where it’s available,” Mayor Sunseri pointed out.
The city also has a five-year strategic plan, with one of the city’s advantages being the installation of Freedom Fiber high speed internet service, Sunseri added.
“I want to emphasize one thing. The city can’t do it all,” Sunseri stressed. “I don’t care what we do or how hard we work, and the council has been fantastic working with me trying to do these different things.
“But we need the community to become involved,” Sunseri continued to stress. “We need volunteers.
“We are limited by our own attitudes,” he added. “If we decide we want to make this work, we can make it work.
“I need everyone to look at this, look at the Main Street program, look at the website and figure out, where can I fit into this and what do I need to do? How can I promote this project?” Sunseri stressed.
“I need the cooperation of the people here...Our park will be a major factor here, the murals we have, the banners we have. We are not that far behind from doing a lot of these things, but it is going to take everyone working together,” Sunseri continued.
Sunseri explained that restrictions are in place concerning opening new businesses. “You can no longer just go into a building and open up a business,” he said.
Guidelines concerning architect requirements as well as fire and safety codes must be followed, according to Sunseri.

Potential businesses need to understand these and all related guidelines before they go further into their quest, city officials indicated.
“This is not a city thing,” Sunseri stressed. “This is the state of Alabama.”
If there is a question, the public is welcome to contact the city; and the city, in turn, will work with them anyway they can, Sunseri added.
After the meeting, Dr. Boshell stressed that the downtown is the heart of any community.
“Anything you can do to revitalize it and to increase business is going to increase the town itself,” Dr. Boshell stated.
Representative Estes recalled he was the coordinator of the Main Street program in the city of Winfield around 25 years ago.

Town lighting, brick pavers, restoration of Pastime Theatre and the pocket park are all the results of the Main Street program, Estes said.
“I will do anything I can to partner with the city of Haleyville to help bring this about,” Estes said. 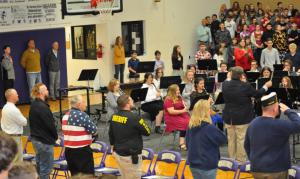