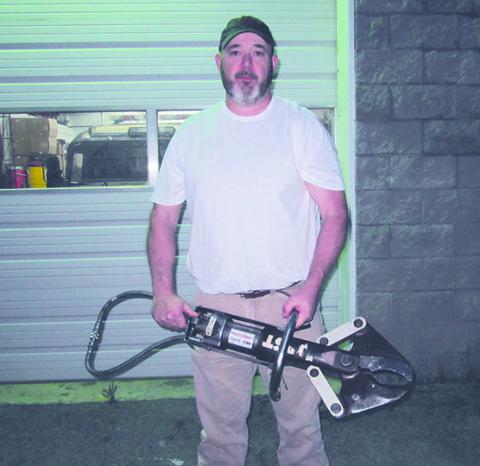 Allen Ward, Double Springs Fire Chief, brought up the issue of the old Jaws of Life set, bought in 1980. While a newer set was purchased a few years ago, neither one are able to cut into a car at a fast pace.

The fire department has tested both of its sets of Jaws. “It took us 25 minutes to pop the door off with the old set. The newer set wouldn’t pop the door off,” Ward said.

“These new cars have some kind of steel in it that when it rolls up, it rolls so tight, [the Jaws of Life] won’t cut it.”

Looking for other options, a new tool on the market has come to Ward’s attention.

“The Mayor [Elmo Robinson] came down and watched us with it. This tool is ten times faster than anything we have.”

The newer tool has no cords or hoses and is lighter. “If we’re off in a ravine somewhere, we can just pick it up,” Ward referred to the hoseless tool.

“This is a battery-powered tool. Each tool comes with two batteries and a charger and will last up to 25 minutes continuously.”

“Our old set takes four gallons of mineral oil, and it’s $125 a gallon.  The new tool takes two quarts of that same oil.”

Ward is looking at several companies’ tools and prices and will put together a package to present to the town council.

Once everything has been looked over, a package will be put together with the tools needed, along with the figures on the fire truck, and then presented to the town council.

Alluding to a possible tragedy, Ward said, “This is what really concerns me. If we did get on a life and death situation call, they could pass away while we’re taking thirty minutes to get the door open.”

“Anything faster will be better to get them out,” he stated.