Stolen vehicle runs out of gas 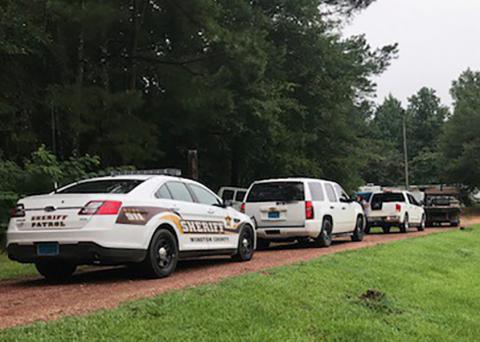 Law enforcement agencies respond to where the stolen truck was located.

LYNN/NAUVOO - A vehicle stolen from a business in the Delmar area ended up in the Lynn/Nauvoo area, after it ran out of gas, and the driver was believed to have cut a fuel line to a resident’s vehicle, before he was taken into custody.

Warren had been driving a 2007 Chevrolet 3500 work truck that had reportedly been stolen June 20, from Talmadge Septic Tank Service, investigators said.

The keys to the truck had been taken from inside the Talmadge shop building, when the shop’s door was pried open, according to Lt. Tim Steien with the Haleyville Police Department.

Also taken from inside the shop were a pressure washer and commercial battery charger, which have not yet been located, Steien said.

The 3,000 tank used for pumping septic services, that had been located on the back of the stolen truck, has been removed and also has not been located, he added.

On Tuesday, July 17, a break came in the case, when a Winston County Sheriff’s deputy was dispatched around 6:30 a.m. to 90 Redbird Lane in the Lynn/Nauvoo area, noted Lynn Police Chief Derreck Cagle.

The caller at that time advised that a truck had broken down and a man was going from house to house asking if anyone had any gas, Cagle said.

After being informed no one could help him, the man left on foot, he added.

A second call came in around 8:30 a.m., when the caller advised they had gotten out to use their vehicle only to find the fuel line had been cut. The caller suspected the line had been cut from the same man who had been going house to house seeking gas, Cagle continued.

At this point, the caller advised the same man was walking back to the stranded truck with a can of gas from the direction of Nauvoo, the chief said.

Cagle responded until a sheriff’s deputy, who as in at the Lakeshore area, could get to the scene.
“When I got there, several of the homeowners were standing outside. The man was putting gas in the truck,” Cagle said.

When questioned by Cagle, the man could not produce any identification or tag receipts, the chief said.

“The vehicle peeked my interest,” said Cagle, adding it matched the description of the one stolen from Talmadge Septic Tank Service several weeks earlier.

After talking more with the man, Cagle obtained his driver’s license and social security numbers, with dispatch advising he had warrants for failure to appear on traffic citations, officials said.
Warren was taken into custody on the warrants, with a run of the truck’s Vehicle Identification Number showing the truck had been stolen, Cagle noted.

Cagle took Warren into custody until a sheriff’s deputy arrived and transported him to the Winston County Jail, Double Springs.

Steien arrived at the scene with the owner of Talmadge Septic Tank Service, who identified the truck as the one stolen and drove it back, Steien said.

*When a defendant is charged with a crime, the charge is merely an accusation until or unless proven guilty in a court of law.