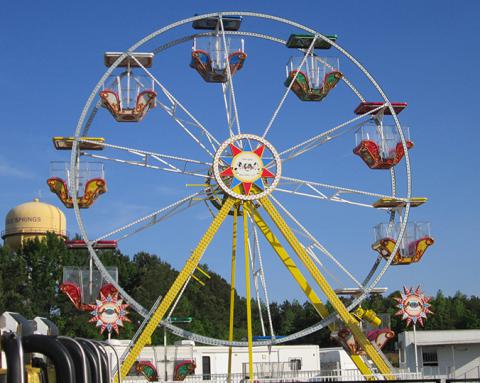 The fair in Double Springs is set to begin Tuesday, April 23. It promises to be a bigger fair than last year with popularly known musical acts in the works.

DOUBLE SPRINGS - Tuesday, April 23, through Saturday, April 27, are the dates for the fair this year in Double Springs, noted Crystal Till of Community Unity at the Double Springs Town Council meeting on Monday, Jan. 14. Plans are to have a bigger fair this year, hopefully having a school day where kids are brought to the fair at a discounted rate.

Different areas are being looked at, including working to have a petting zoo again, along with a concert.

Till also noted they hope to work with Kerry Roberts, 4-H extension agent, to expand upon the 4-H portion of the fair this year.

April Flake, also of Community Unity, spoke with 9-1-1 Festival planners and got contact information for bands and artists.

The contact list is divided into tiers, the lower two being $5,000 and $10,000. This means the bands listed under each tier would come to the fair for that specific amount.

“We’d like to have a well-known group on Friday or Saturday night to help draw the crowd on the weekend,” Till stated.

“I think we need to gear toward bigger and better,” Flake added. “Instead of doing little things, do a couple of big things and do them right and grow (the fair) that way.”

Flake will be getting the list of bands and their tiers to the town council for act selection.

“(Community Unity) can only raise so much money trying to get these sponsors,” Mayor Elmo Robinson said. “If we want a good fair, we as a council are going to have to put some money into it to help. I agree with them about getting better entertainment and maybe spend a little money on this to get them here. I think it’ll help. I think it’s a good way to give back to the city, some entertainment for them.”

A short discussion about the acts getting booked up quickly revealed the need to hurry about making the selection.

A motion was made and passed for the town to give up to $10,000 for the fair and other events for Community Unity through 2019.

The mayor also gave his appreciation to Crystal and April for all the work they keep doing for the area.

Robinson then motioned the two to the front and presented awards to them.

“We appreciate what y’all have done,” Robinson said as he delivered the two awards.

“I say thank you for giving us the opportunity,” Till said. “We both had ideas and things we wanted to do. We care about our town, and you gave us the opportunity to do it. You said you would support us and you have.”