9/11 commemorated by Veterans of Foreign Wars 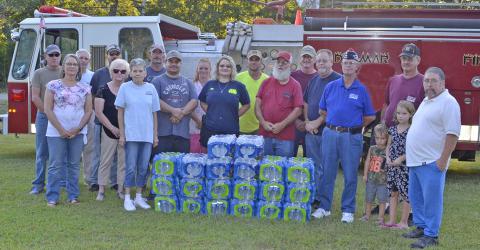 Veterans of Foreign Wars members and Auxiliary present cases of water to representatives from area fire departments in memory of Sept. 11.

DELMAR - Veterans of Foreign War post members and Auxiliary remembered the victims of the September 11, 2001 terrorist attacks on the nation by giving back to local fire responders during their meeting Monday, Sept. 9.

Gathered in front of the post home in Delmar, members were joined by representatives from Delmar, Craft, Lynn and Bear Creek fire departments for the ceremony, where Post Commander Dwight Thomas read a short speech about 9/11, then presented the fire departments with cases of water, an always welcome gift.  Water cases will also be presented to the Haleyville Fire Department, who were battling a blaze at the time of the ceremony and were not able to attend.

Following Thomas' remarks, fire department representatives were invited into the post home for a meal.

The following is the full speech from which Thomas' pulled his remarks:

On September 11, 2001, America witnessed a brand of ruthlessness and evil beyond the realm of comprehension.  It was difficult for us to grasp the scope of the tragedies that day.  It was one of the single most tragic days in our nation's history, and many of us thought it was the worst day of our lives.

Nearly two decades have passed since that fatal day, and for most, the memories of what happened that day are still as vivid and painful now as they were 18 years ago.  And while time cannot ever remove that pain, we can find some solace in remembering how our nation was united in the subsequent days and months following the attacks.

That day, we refused to allow evil to triumph over good.  The accounts of hope and heroism that emerged from the rubble of ground zero, the Pentagon and the rural Pennsylvania field inspired us all.  To this day, those remarkable chronicles of valor continue to serve as reminders of all that is good and true in the human spirit.

In our grief, our nation and its citizenry stood tall and defiantly proud in the face of our enemies as police, firefighters, airplane passengers and crew members gave their lives to save their fellow man.  Their heroism will never be forgotten by a grateful America, nor by VFW members who, by their own experiences, recognize heroism and the high cost that comes with it.

From that day, we made a determination that no such attack will again be visited on us or any other nation.  We learned that we must combat terror and those who seek to deliver terror.  Today, we are fighting to ensure that the liberties we enjoy - the freedoms we cherish - will be secured for future generations.

Today, as we honor the memory of the 2,977 lives lost of 9/11, we know that our nation is indeed more secure.  The resolve born out of tragedy has made us stronger and has made us better as a nation.  The terrorist attacks 18 years ago did not weaken  us or dampen our spirit.  Instead of being defeated, Americans and freedom-loving people from all over the world united...and together, in a time of disbelief, chaos and great loss, we boldly stood together as a nation and refused to succumb to fear or despair.  It truly became one of our finest hours.

This tragedy served to remind the world of everything America stands for, that America will always stand tall and strong against violence and evil, and that we will fight for the freedom to live our lives free from tyranny and fear.  We stood tall to safeguard the American dream, the very way of life so many before us have fought and died to protect, and what so many of our new generation of service members continue to selflessly put their lives on the line to defend today.

Though there is no doubt the memory of the innocent lives taken as a result of the September 11, attacks will remain etched in our minds, the heroic acts displayed by firefighters, police officers, emergency personnel and the average American citizen alike - moments of valor, courage and selflessness - reminded all of us, and the rest of the world, of the ever-present American values that have carried our nation so admirably from century to century.

From the outside looking in, many will never understand our way of life.  They will never comprehend, nor will they accept the basic premises upon which our great nation was built:  independence, justice and sovereignty.  And there's no question that America will still face threats to our way of life, whether it be overseas or right here on American soil.

For generations to come, Americans will look back to the events of September 11, and remember that freedom is never free, and it is our responsibility to preserve liberty and maintain our ideals.  By doing so - just as we are doing today - we continue to honor the memory and deeds from that fateful day.

Let's pause to honor the victims and those who've selflessly sacrificed to protect and defend our freedom by recommitting ourselves to our families, to our communities and to our country.  For generations, America has served as a beacon of hope and light to the world.  We must continue to be that inspiration.  That's the best way to honor the memory of those lost during the events of September 11.