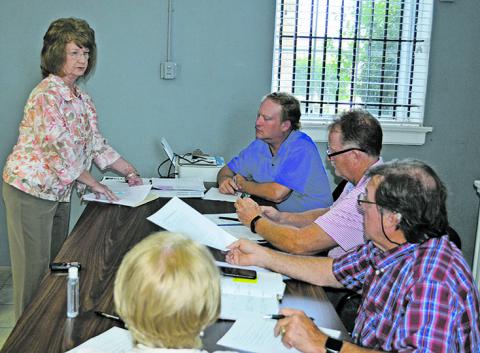 DOUBLE SPRINGS  -  The request for a newer vehicle for the Winston County Revenue Commissioner’s office was denied by the Winston County Commission, stating the office had already been given a vehicle, but it is not being used.
Revenue Commissioner Sandra Wright, after reporting her insolvents and litigations, made a request to the commission during their regular meeting Monday, June 14, providing a breakdown on what a vehicle for the office would cost the county, state and  schools in the reappraisal budget.
The cost from the county’s general fund and road and bridge account would only be $7,481.10 based on a $30,000 vehicle, Wright explained to Commission Chairman Roger Hayes and Commissioners Bobby Everett and David Cummings.
“You are wanting a new vehicle, and you are not going to get a four-wheel-drive for $30,000,” Hayes responded to the request.
“I have already told you I will buy you a used regular pickup, but you don’t want that,” Hayes added. “And I am not for buying one until we get that.”
“This is just to let you know we can take (the cost) out of reappraisal,” Wright responded. “It’s not going to cost that much. If you get one for the road department, you don’t have the reappraisal to break it down.”
Hayes noted the county had provided an older model Crown Victoria, formerly used by the road department, to the revenue commissioners office for reappraisal to use.
Cummings then interjected, “On buying a new vehicle right now, it’s  not happening unless you want to wait nine months.”
“I am needing a dependable vehicle,” Wright replied. “It doesn’t have to be new.”
Hayes answered he did not have a problem buying a vehicle that’s two-wheel-drive. “But that is not what you want,” he said.
Wright noted that those in her office who conduct reappraisals have places they go, especially around Smith Lake, where they cannot get out unless they have a four-wheel drive vehicle.
“I don’t have a problem buying a truck. I just want to buy it from surplus,” Hayes noted.
“That’s OK with me. I don’t have a problem with that,” responded Wright.
Everett asked Wright if they were seeking a surplus vehicle.
“There is nothing there,” Wright responded.
“Here’s the deal on it,” Hayes said, “I tried to get them an SUV (on surplus). Those are out. They are not turning those back in. When the state budget was signed,  they would have pickups that would be turned back in.
“They have got a regular two-wheel-drive pickup, but they don’t have four-wheel-drive pickups,” Hayes added about state surplus.
“I just know,” responded Wright, “that we have a lot of work to do.”
“I understand that,” interjected Hayes, “and I will get one as soon as they become available.”
Hayes said the car the revenue commissioner’s office has been using does not have air conditioning and is old.
“It is old,” agreed Wright. “I am afraid for them to go in it because people are thinking he’s trying to break in. It looks like a beat-up drug car.”
Cummings asked if the appraiser had signs to place on the car to identify it, to which Wright responded they did not.
“Well, you need to buy magnetic signs,” Cummings responded. “The vehicle needs to be identified before he goes anywhere.”
Wright asked that, since the revenue commissioner’s office could not get a vehicle right now, could the driver not use his own personal vehicle and apply for mileage.
“What’s the difference in him doing mileage on a two-wheel-drive vehicle than doing mileage in our vehicle that’s two-wheel-drive?” Hayes asked. “That’s what I don’t understand.”
Wright thanked the commission for their time then left.