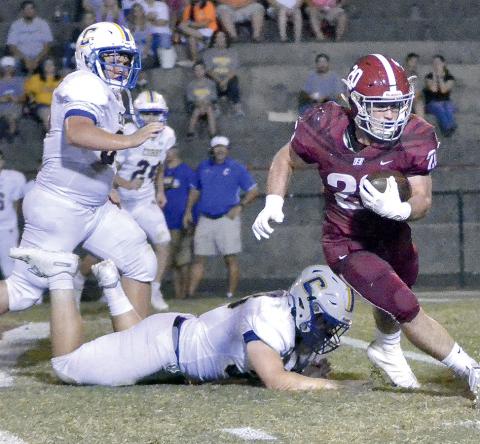 Ty Black cuts to the right on a carry for the HHS Lions. Black scored one of the two touchdowns on the night and had 18 carries for 105 yards.

HALEYVILLE -  The Haleyville High School Lions (3-3, 2-1) captured their second region win Friday night, Oct. 4. The Lions won 15-6 over the Curry Yellow Jackets (0-6, 0-3).
HHS had 253 total offensive yards, with quarterback Eli Musso 3/9 and 33 yards in the passing department. He garnered 21 yards on seven carries and one touchdown. Leading rusher was Ty Black with 18 carries and 105 yards. Total team carries were 41, gaining  220 yards.
Haleyville won the toss and elected to receive the opening kickoff. Caleb Williams took the ball and returned it for 25 yards to the CHS 34.
Nick Whitman carried down to the 25-yard-line, where Ty Black moved the chains to the 20. Kane Gravitt Tucker’s number was called for 12 yards and a first-and-goal at the 2. Musso kept for the touchdown. HHS was successful on a two-point conversion attempt, with Camden Smith doing the honors. The Lions led 8-0, with 9:42 left in the first quarter.
Curry scored with just 44 seconds left in the first half. The Lions were forced to punt from their own end zone. The punt was rushed, with Jackson Kennedy electing to run the ball. The Jackets were able to stop the run and took over on downs at the HHS 12.
Aaron Oswalt scored on the third play of the series from eight yards out. The two-point conversion failed, leaving the halftime score 8-6 in favor of HHS.
Haleyville’s final scoring drive of the night came late in the third quarter. The Lions started on their own 8-yard-line on a punt by Andrew Stewart. A face mask penalty pushed HHS to the 15, where Musso kept for eight yards. It was Black with two more carries and Whitman for one to the HHS 36. Jackson Kennedy got a first-and-10 near midfield. Black moved the chains once more on a 13-yard carry and Whitman went first-and-goal to the CHS 10. Black travelled untouched into the end zone for the six points. Jacob Lolley kicked the extra points to finalize the scoring.
HHS Head Coach Chris Musso said following the game, “We are still working on building and developing our program. Anytime we can have success, I am very excited for them. I am not excited about all the penalties tonight. We will take care of all of that Monday. I want to thank the community of Haleyville for coming out tonight. We had a great crowd here to support us. Congratulations to the homecoming queen and we are grateful for the wonderful job the band and cheerleaders do each week. I am very proud to be a Haleyville Lion and look forward to getting better each and every week.”
The Lions will be at home Friday night against region opponent Good Hope.
Homecoming
Hallé Tolbert, escorted by her father Reggie, was  crowned homecoming queen during halftime festivities. The selection is by student body vote. Other senior representatives were Molly Gilbert, Reagan Kutis, Mallory Rushing and Faith Anne Smith. Meredith Robertson represented the junior class; Kaitlyn Burleson, sophomore and Allie Bishop, freshman.