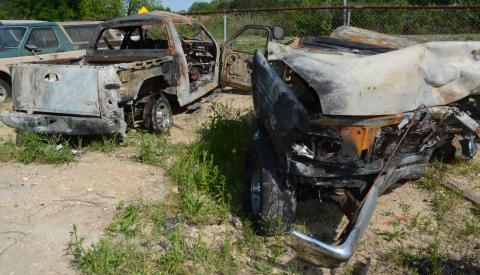 Firefighters had to extinguish the blaze then use the Jaws of Life to cut away portions of the vehicle in order to free the trapped occupants
NAUVOO - A two vehicle fiery crash around the Nauvoo area Saturday afternoon left two people dead and two others injured, one of whom being found at the bottom of a steep ravine off the highway, the other walking around on the highway, authorities on the scene said. Fatalities were William Wade Young, 49, of Winfield, driving a 1991 Ford F150, and Donnie Russell Huddleston, 58, of Decatur, driving a Toyota Yaris, according to Mark Stone of the Alabama Law Enforcement Agency. The collision, occurring around 3:18 on Highway 5 just north of Nauvoo, resulting in one of the vehicles on the side of the highway facing a guard rail, with the rear of the other vehicle striking the guard rail, noted Lynn Fire Chief David Harris. Chief Harris described the two vehicles in the collision as being tangled together and fully engulfed in flames when authorities arrived on the scene. The Lynn Fire Department worked with departments from Nauvoo and Carbon Hill to first extinguish the blazing vehicles, applying about 400 to 500 gallons of water, before they could work to remove the driver from each vehicle, authorities said. Winston County Deputy Coroner Don Dimond responded to the scene and pronounced both drivers dead, he said. Once the blazes were extinguished, the Lynn department used their Jaws of Life to cut away sections of both trucks before the entrapped drivers could be removed, Chief Harris said. Firefighters used the jaws to cut away the vehicle A posts. “We had to take the top off one of (the vehicles),” he said. “We worked on one truck and got one victim out, and then went to the other truck and got the other victim out,” he added. After the bodies were removed from the vehicles by firefighters and the deputy coroner, they were transported from the scene by the coroner’s office. The Alabama Department of Forensic Science transferred both bodies for further evaluation and to determine cause of the deaths. The Huddleston vehicle reportedly had three occupants with two of the occupants found outside the vehicle but in different areas, Harris said. “One was at the bottom of the ravine,” Chief Harris said. Authorities on the scene believe that two occupants were ejected from the vehicle during the impact of the crash. Emergency responders had to scale down the 100 to 150 foot ravine in order to reach the female passenger, said Chief Harris. “We took ropes and went down the bank,” he said, noting the female was placed in a Stokes basket and brought up the ravine. Although the female victim was conscious, she was in bad shape, Harris reported. She was transported by Regional Paramedical Service ambulance to Walker Baptist Medical Center, Jasper, officials on the scene said. “It was pretty rough. We had to walk up a pretty good size embankment,” said Harris. The other passenger, a male, was walking on the pavement, at first declining medical treatment then later going by RPS to Walker Regional Medical Center, authorities said. Also responding to the scene was a helicopter by the Regional Air Medical Service operated by RPS, officials indicated. “It appeared to be a head on collision,” Chief Harris said, adding the crash occurred in a straight-away section of Highway 5. The Toyota Yaris was reportedly traveling southbound on Highway 5, while the Ford was traveling northbound when the collision occurred, officials said “We had shut the whole highway down, I guess about two and a half to three hours,” Harris said. Traffic during this time was detoured on a road in the Ashbank Church area back around to Nauvoo, emergency responders said. Other agencies responding were ALEA, which is investigating the accident, as well as the Winston County Sheriff’s Office.