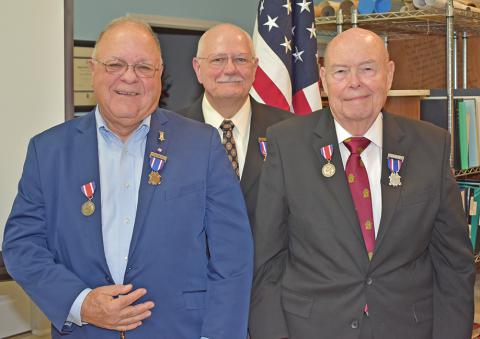 Brent Goodwin, James Poarch and Howard Poarch visits the archives for the November WCGS meeting in hopes of setting up a camp for the Sons of Union Veterans.

DOUBLE SPRINGS - A Civil War camp may be in the works for Winston County.  However, this time, it will be the Sons of Union Veterans of the Civil War who are getting it set up, though members of the Sons of Confederate Veterans are welcome to join.
Winston County is rich in historical heritage to the “boys in blue”, evidenced by the number of soldiers the “free state” sent to the Union army. Many descending lines can still be found in Winston County. Just because the county is located in Alabama does not necessarily mean all of one’s ancestors fought for the Confederacy. In fact, two-thirds of those who fought in the Civil War from Winston County were Union-minded folks.
Brent Goodwin and Howard Poarch, recruiters from Major General John T. Croxton, Camp 17, in Birmingham, attended the Winston County Genealogical Society meeting Tuesday, Nov. 19, in hopes of being able to find enough interested persons to form a camp. If formed, it will be camp number 67.
“We are hopeful we can generate the interest in this area to have your own camp,” Poarch, senior commander, began. Poarch explained how his camp in Birmingham started from nothing just one year ago and is now a fully recognized camp.
“We honor our veterans, our ancestors.  We go out and look at the graves to see if they need to be fixed or repaired,” Goodwin explained. Union veterans buried at Oak Hill Cemetery in Birmingham needed headstone  and grave work, and Camp 17 was able to get all the graves repaired. “We took two loads of sand, two loads of dirt and pine straw and fixed up the headstones. We got national news coverage.”
Goodwin used this as an example to tell the assembled group as a camp comes into its own and starts being involved, it will be notarized across the United States.
Goodwin explained Winston County will be the fourth camp in existence in Alabama, the others being in the major cities of Huntsville, Birmingham and Montgomery.
The majority of Union veterans in Winston County joined the First Alabama Cavalry, which had more than 2,600 soldiers. They were made famous by the fact Major General William Sherman, on his “March to the Sea,” had selected the FAC as his personal escort on the way to Savannah.
“We’d like to work with any of you who are interested,” Poarch said. “The application is fairly simple.”
“We will help you get this camp off the ground,” Goodwin added.
“For the women, you can’t be in the sons,” Goodwin said. “There is a group for daughters of Union soldiers,” he explained, as there exists the Auxiliary to the Sons of the Union Veterans of the Civil War.
Union veterans of the Civil War, in 1866, formed the Grand Army of the Republic until 1956, when the last Union veteran died. The SUVCW was chartered officially in 1954, as a patriotic heritage organization.
The SUVCW:
• encourages respect for the flag;
• helps youth understand the responsibilities of good citizenship;
• instills a sense of patriotism among all Americans;
• cares for and provides grants for Civil War memorials and monuments;
• maintains a database of Civil War veteran graves;
• seeks out and marks the graves of Civil War veterans;
• locates and preserves GAR records;
• supports battlefield preservation;
• teaches the true history of our country;
• presents college scholarships to outstanding students;
• promotes observance of Memorial Day;
• commends ROTC, JROTC and other cadets;
• recognizes Eagle scouts and
• salutes all who have served our country.
Hereditary eligibility requirements, for members and juniors are as follows:
• must be a male over age 14 (ages six to 14 for juniors);
• are descended from a Union Civil War veteran who served honorably;
• have never been convicted of a serious crime and
• have never voluntarily borne arms against the United States.
Males who cannot claim hereditary ancestry but show a genuine interest in the Civil War may become associate members.
A meeting is being planned in January, possibly in Haleyville, as a way of getting interest in starting the camp. Joel Mize, local author and Byler Road whiz, will be heading the meeting and hopes to form the camp.
The Alabamian will publish more on the upcoming meeting as time gets closer.
For more information, visit suvcw.org or call Mize at 256-856-0354.
The next regular WCGS meeting will be Tuesday, Jan. 21, at 6 p.m. at the Winston County Archives in Double Springs.