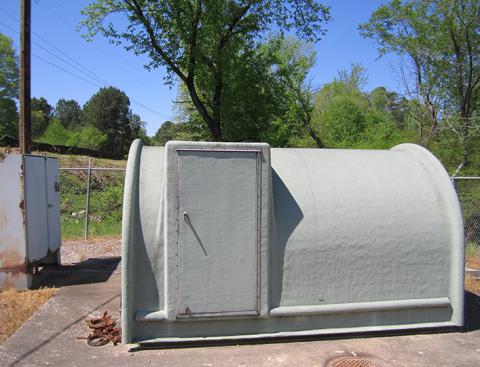 Pump station 12, in Blake Curve on Newburg Road, is one of the pump stations to be replaced with money received from the $1 million loan.

HALEYVILLE - When the Haleyville Water Works and Sewer Board applied for a $1.5 million loan to work on a sewer project, it was hoped to receive principal forgiveness in the amount of $500,000. The loan was approved, but Haleyville did not qualify for the principal forgiveness, as other cities showed more need. This was the topic at the recent board meeting on Tuesday, April 23.

According to Engineer Calvin Cassady, the 10-year plan only provided for repayment of $1 million instead of $1.5 million. The loan is titled “2019 Clean Water State Revolving Fund,” and is overseen by, and was applied for through, the Alabama Department of Environmental Management.

The loan was geared toward replacing pump stations 5, 11, 12, work on pump station 10, working on a sewer line on Newburg Road and other areas needing maintenance.

“What we’re doing right now is trying to come up with a project that’s under the million dollars and use that money,” Cassady said.

There are areas needing work, Cassady told the board.

“We have some needs on pump stations and the wastewater treatment plant. We’re trying to evaluate and see which ones are the worst and putting our money toward those and staying under $1 million dollars.”

The reason for staying under the $1 million amount is to stay in the 10-year plan.

Once it was known Haleyville would not receive the forgiveness, only three options were available:
• take the full amount at $1.5 million with a 20-year payment plan and 2.3% interest;
• cut the loan to $1 million with the same terms or
• not take the loan.

The board went with option two. The deadline to submit the application to ADEM is May 30. Once everything is finalized, the projects will be ready for bidding in the fall with work starting this December.

Pumping stations are used to move water or waste from one facility to another. More than 30 pump stations are in the Haleyville area.

“We should have the projects identified by the next meeting and move forward on this,” Cassady told the board.

The only other business conducted at the meeting were the approving of the previous minutes and a review of finances.

The next meeting will be Tuesday, May 28, at 7 p.m., at the warehouse building on 20th Street.