Going the extra mile to remember the fallen 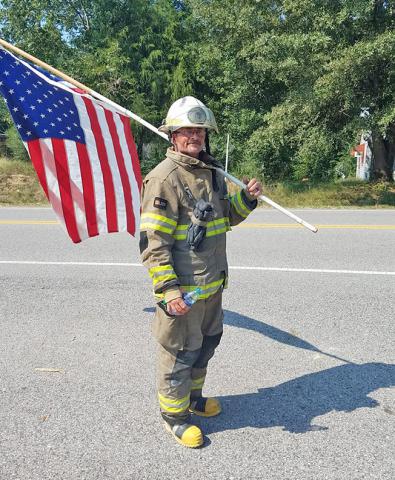 DELMAR - A local firefighter has gone the extra mile today to remember the nearly 3,000 lives lost September 11, 2001, including 343 fellow firefighters.

Delmar Volunteer Fire Department Assistant Chief Micah Ouellette felt compelled to use today to take his own version of the 9/11 Stair Climb, a way firefighters and members of communities across the nation pay tribute to the 343 firefighters who lost their lives in the terrorist attacks 18 years ago.  However, there is no gym in Delmar where Ouellette could climb 110 stories - representing the 110 stories that comprised the World Trade Center, which was struck by planes hijacked by terrorists on that terrible day.  Instead, Ouellette came up with a plan to walk in memory of his fellow firefighters.

Ouellette came to the Delmar Fire Station the morning of Sept. 11, and donned his personal protective equipment or turnout gear, which weighs approximately 70 lbs.  Hoisting a large American flag on a pole, Ouellette took off on foot north on Highway 13, planning to take 2,000 steps in memory of the 343 firefighters.  Ouellette planned initially to only walk one mile, but walked two miles.  Up to the Delmar Quick Stop, then turned around heading back to the fire department.

Naturally, he attracted a lot of attention, which he did not want for himself, only for those who lost their lives 18 years ago.

"In Winston County, we are very patriotic,"  Ouellette said.  "We have to let people know we haven't forgotten."

Ouellette was cheered on by drivers-by, seeing first hand how people truly care about one another.

"A tow truck driver stopped to offer me a bottle of cold water,"  Ouellette said.  "Two Morgan County Sheriff's deputies stopped to make a picture with me, then turned their lights on me while I walked.  A little girl stopped to ask if I wanted a ride."

After completing his duty, Ouellette definitely was ready for a ride, thanks to the toll the 90+ degree heat combined with the heat index had taken on him, since he was wearing turnout gear.  A fellow Delmar firefighter who came up on Ouellette offered him a ride back to the station.

Ouellette said this recognition of Sept. 11 victims was not a planned event.