HALEYVILLE - Upgrades and improvements are in the pipeline for the Haleyville Airport, but are all subject to approval from other entities.
TUSCALOOSA - The University of Alabama awarded some 5,716 degrees during its spring commencement May 3-5.
FLORENCE - The following local students graduated from the University of North Alabama recently at the close of the spring semester:

The Winston/Marion County District Attorney's Office has confirmed to the Alabamian that a two-year-old child died over the weekend. The case is under investigation  by the DA's office.

The Alabamian will provide more details as they become available.

WINSTON COUNTY - The National Forests in Alabama, Bankhead Ranger District, is soliciting applications for a concession special use permit for the operation of two developed recreation sites, Clear Creek Recreation Area and Corinth Recreation Area.
WINSTON/MARION - An overnight storm system that quickly swept through the area left some tree and power line damage in its wake, resulting in power outages that are still ongoing.

Winston County Commission Chairman Roger Hayes, left, explains about the need to keep equipment updated for the sanitation department. Also shown is Commissioner Bobby Everett.
DOUBLE SPRINGS - A resolution passed by the Winston County Commission Monday, June 10, increased rates for garbage collection service by $1.50 for a total of $14.75 per month for the service, with an additional $3 late fee applied each quarter to any rates that are not paid.
HANCEVILLE - Wallace State Community College congratulates the 804 students named to the president’s list and dean’s list for the spring 2019 semester. 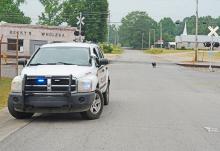 Lynn Police will have even more of a visible presence in the town.
LYNN - The small, tight knit town of Lynn has been compared through the years to the Mayberry community on “The Andy Griffith Show”, but the stereotypical small town atmosphere of everybody knowing everybody doesn’t always work in police business.

Board President Joey Boteler and other board members approve the purchase of seven vehicles for school use.

DOUBLE SPRINGS - The use of personal vehicles while on business by Winston County School System employees is no longer needed, since the purchase of seven vehicles was approved at the board of education meeting, Tuesday, June 11.
SUMITON - The Alabama Legislature passed and Governor Kay Ivey signed an education budget that includes $950,000 in funding to expand Bevill State Community College’s mine training facility to include longwall mining training.

HALEYVILLE - Haleyville Mayor Ken Sunseri told Haleyville City Council members during the June 3, meeting that he has hired five new volunteer firemen.  They are Branden Roberts, Cameron Miller, Kyle Doss, Ethan McBroom and Blane Godsey.  They will be paid at a rate of $17.83 per call.  The only item on the council’s agenda was approving minutes from May 20. Double Springs resident Jack Baldwin with many of the medals he received for his service during WWII, including the French Legion of Honour.
Editor's note: In commemoration of today, June 6, being the 75th anniversary of the Allied invasion of France - known as D-Day, we are posting an article that ran in the Alabamian approximately five years ago. The article is about Double Springs resident Jack Baldwin, who received the French Legion of Honour for his role in helping to liberate France from the Nazis. The article includes Baldwin's personal recollections of landing at Normandy on D-Day. Please note that the dates within this article reflect the timeframe when it was written five years ago. DOUBLE SPRINGS - A Double Springs man has joined a short and very prestigious list of persons to receive France’s highest honor. 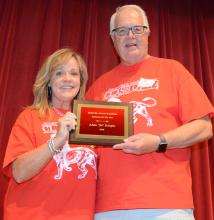 Bo Knight receives the Alumnus of the Year award presented by Debbie Wood, president of the Haleyville Alumni Association.
HALEYVILLE  - Bo Knight, described as knowing the value of hard work and never expecting from others what he is willing to give, was honored with thunderous applause, when he came forward to receive the highly coveted Alumnus of the Year award at the city’s annual luncheon Saturday, June 1. ADDISON - Retired Addison Police Chief Donald Baker was killed Monday afternoon, June 3, in a motorcycle accident in the vicinity of Dunlap, Tennessee.  Baker's body was returned to Nichols Funeral Home in Addison Monday afternoon in a large convoy comprised by law enforcement officers from across Winston County and the surrounding area. Welcoming Davey Reed on board as new principal of Haleyville High School, from left, Board of Education President Donna Jones, Chere Fetter, who has served as high school interim principal. Standing to the right of Reed is HCS Superintendent Dr. Holly Sutherland.
HALEYVILLE - In a special called meeting Friday, May 31, Davey Alan Reed was hired by a unanimous vote of the Haleyville Board of Education as the new principal of Haleyville High School for the 2019-2020 school year effective June 3. 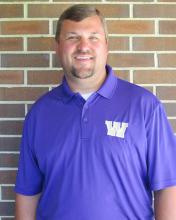 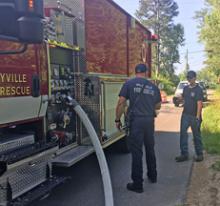 HALEYVILLE - Friday morning, May 24, Fire Chief Terrell Baccus was in the area of 21st Street and Alabama Avenue, when he saw black smoke billowing from the south Haleyville area.

“I could tell it was more than a controlled burn. I called dispatch. They said they didn't have any reports of any controlled burn, so I came and inspected it and found a structure fire fully involved,” Chief Baccus stated.

Discussing the issue, from left, Winston County Commissioner David Cummings, Chairman Roger Hayes and Commissioner Bobby Everett. Also shown is administrative clerk Judy Burnett.
WINSTON COUNTY - $800,000 in arrears caused by residents not paying their fees for sanitation collection services has forced the Winston County Commission into taking its strongest action yet, reaching the point of legal action to get residents to pay up on past due bills. Discussing the indebtedness, from left, Mayor Tammie Batchelor, Clerk Jamie Green and Attorney Cole Christopher.
BEAR CREEK - The time has come for the Town of Bear Creek to turn over all of its finances to the Alabama Attorney General for investigation, after the town council and members of the public discussed back payments never made to the Internal Revenue Service during a previous administration, that are now coming to a head. 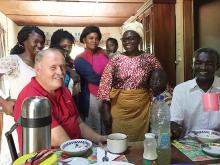 Seated are Pastor Jonathan Uncapher and Dr. Isaac Gwan. Standing left to right, Grace Mokem, university student; Guilene Pagnou, lab technician; Leonie Fokou, teacher and her child; Solange Gouffo, head teacher and Cornelius, young boy.
ARLEY - The Church at Arley, located three miles south of the town on County Road 41, has received many donations, including much needed medical equipment, which is being sent to Nomedjoh, Cameroon, just north of the equator in west Africa. It had 712 inhabitants in 2005.
WINSTON COUNTY - BEF Foods, Inc., a Lima, Ohio establishment, is recalling approximately 527 pounds of beef pasta products that were produced without the benefit of federal inspection and outside of inspection hours, the U.S. Department of Agriculture’s Food Safety and Inspection Service (FSIS) announced today.
PHIL CAMPBELL - Northwest-Shoals Community College has announced its president's and dean's lists for the 2019 spring semester.
DOUBLE SPRINGS - The Winston County Board of Education met Friday morning, May 17. A list of non-renewing employees was approved at the meeting. Those teachers and employees are listed as follows
WASHINGTON - Senator Doug Jones (D-Ala.) has cosponsored legislation to ensure that pregnant women can access affordable health coverage during and after their pregnancies. 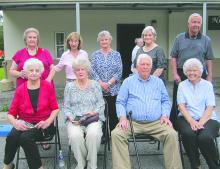 Members of the Lynn High School Class of 1960 are outside the town hall and community center at Natural Bridge which was just on fire. Back row from left are Linda Garrett, Bobbie Ann Rhodes, Betty Jean Downey, Mavis Emberg and Lon Hicks. Front row, Ola Fay Gustafson, Linda Prestridge, Joe Norris and Peggy Lynn.
NATURAL BRIDGE - It is the time of year for class reunions, and the Lynn High School Class of 1960 met for their 59th on Friday, May 10, at the Natural Bridge Town Hall and Community Center. The quiet gathering soon turned into a cry of fire when a passing motorist noticed smoke coming from the eaves of the building and alerted those inside.
HALEYVILLE - A bill working its way through the Alabama Senate is being looked unfavorably upon by the Haleyville City Council, which expresses its dissatisfaction in a formal objection during their May 6, meeting.
HALEYVILLE - Haleyville High School has won the Alabama Association of School Boards 2019 statewide video contest. The Alabama Association of School Boards today announced the winners of its 2019 statewide student video contest, “Road to Success.” A portion of a roof blown off of a building at Greenleaf Apartments.

WINSTON COUNTY - Hunters in Alabama can now hunt white-tailed deer (when in season) and feral pigs with the aid of bait on privately owned or leased lands if they have purchased and are in possession of an annual bait privilege license issued by the Alabama Department of Conservation and Natural Resources.
DOUBLE SPRINGS - The vote was mixed among Winston County Commissioners to amend a resolution they passed last year redirecting both property tax mills being collected from county taxpayers, to the Health Care Authority of Haleyville and Winston County Alabama.
WINSTON/MARION COUNTIES - The national rise in cases of measles - a disease which was considered virtually eradicated in the United States in 2000 - is causing worry throughout the nation. 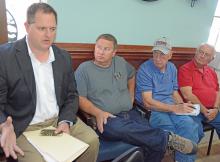 Above left, State Representative Tim Wadsworth, who is also providing a building for Capstone Clinic to open in Arley, speaks out. Above right, attorney Jeff Mobley, representing the health care authority, says collaboration is the key rather than competition. Also shown is health care authority chairperson Judy Bittinger.
WINSTON COUNTY - Before the Winston County Commission took a vote April 29, to apply two mills of property tax directly to the Health Care Authority of Haleyville and Winston County, a tremendous amount of discussion erupted, with several opposing the idea.
BEAR CREEK - An 18-month-old girl was mauled by a pet dog, resulting in the child being airlifted to Children’s Hospital for surgery and the pit bull quarantined then put to sleep at a local veterinary clinic.
WINSTON COUNTY - Double Springs Elementary and Lynn Elementary Schools are among 33 schools across the state to receive grants through Blue Cross Blue Shield of Alabama's Be Healthy School Grant Program.
BIRMINGHAM - Ten defendants - including a local pharmacist - were charged in a 103-count indictment, regarding a Haleyville-based pharmacy, Northside Pharmacy doing business as Global Compounding Pharmacy.
MONTGOMERY - By a 28-2 vote Thursday, May 2, the Alabama Senate approved a $7.1 billion Education Trust Fund for Fiscal Year 2020...
Subscribe to